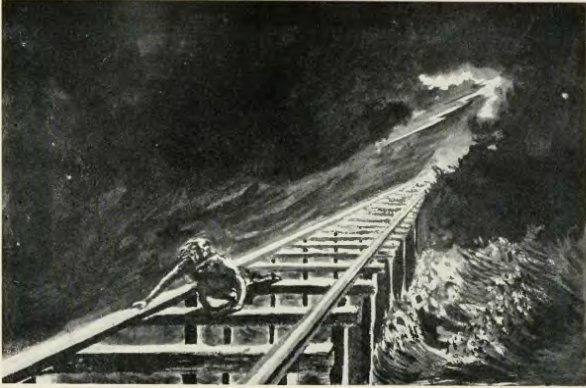 In central Iowa, a potentially horrific passenger train wreck was averted thanks to a heroic teenage girl. The girl was 17-year-old Katherine Carroll “Kate” Shelley, who lived in that region of the Hawkeye State with her family.

Kate had been born in Ireland, and she and her family immigrated to the United States when she was only 18 months old. They ultimately settled near Honey Creek, a tributary of the Des Moines River, in Iowa’s Boone County. Kate’s father, who worked as foreman of a section crew building tracks for the Chicago and North Western Railway (C&NW), died in 1878. With her mother in bad health, Kate found herself serving as the de facto head of the household. Kate provided for her mother and siblings by planting and harvesting crops and also hunting for food.

Kate’s tenacity and strong sense of self-reliance were put to a severe test on the night of July 6, 1881. Heavy thunderstorms that began sweeping through the area earlier in the day brought about a flash flood at Honey Creek. This flood washed out timbers that had been supporting the trestle bridge across the tributary. Consequently, at around eleven o’clock that night, a locomotive sent out to check track conditions in the still-stormy weather ended up plunging into Honey Creek as more of the bridge fell apart.

Kate heard the crash of this locomotive after it plummeted into the overflowing water, and – carrying one of her late father’s railroad lanterns to light the way – she raced to the site of the washed-out bridge. Two of the locomotive’s four crew members had managed to climb up onto the branches of a large tree there. There was no sign of the other two crew members. Kate, realizing that the men in the tree were not able to climb down due to ever-worsening flood conditions, shouted that she would get help.

Kate’s race for help took on a whole new urgency after it dawned on her that an eastbound passenger train traveling from Omaha was scheduled to pass through the area at midnight. Unless she could get to the depot in the Iowa community of Moingona in time to warn the personnel there about the collapsed trestle bridge, there would be a far worse accident at Honey Creek.

To reach the Moingona depot, Kate had to trudge along the tracks as fast as she could in spite of the strong showers and winds. By the time she arrived at the bridge across the Des Moines River, however, her lantern went out as a result of the steady downpour of rain. Kate fell to her hands and knees and crawled across the bridge, with only the lightning providing her with any illumination. She also managed to keep her composure despite the raging river below and the sharp splinters that dug into her skin.

After completing this long crawl across the bridge, Kate got back up on her feet and ran for at least one mile (1.6 kilometers) along the tracks to get to the depot. When she arrived there, Kate shouted out the news about the dangerous situation at Honey Creek and then fainted. She had arrived just in time, with the people at Moingona able to alert another depot along the route to stop the train (carrying approximately 200 people on board) from traveling any further.

By the time a group had been organized to rescue the stranded crew members at Honey Creek, Kate regained consciousness. She insisted on joining the rescue party and soon led everyone to the site. The group was able to eventually and safety retrieve both crew members who were up in the tree. (Tragically, however, the body of another crew member was located downstream; the fourth man was never found.)

Kate, who lived until 1912, achieved national fame for her heroic lifesaving efforts. There were poems and songs composed in her honor. The passengers on that train took up a collection for her, and the state of Iowa gave her a medal crafted by Tiffany’s. In addition, the C&NW presented her with a hundred dollars, a half-barrel of flour, half a load of coal, and a lifetime pass. Not to be outdone, the Order of Railway Conductors presented Kate with a gold watch and chain.

In 1901, the C&NW built a new bridge spanning the Des Moines River to replace the one that Kate had once crawled across. This new structure was officially named the Boone Viaduct, but it soon became better known as the Kate Shelley Bridge or the Kate Shelley High Bridge. When another viaduct built in that area was opened in 2009, it was formally designated the Kate Shelley Bridge. It is one of the tallest double-track railroad bridges in all of North America. Kate Shelley also became one of the first women to have a train named after her, with C&NW’s streamlined passenger train Kate Shelley 400 making its inaugural run in 1955.

For more information on Kate Shelley, please check out https://www.kateshelley.com/about-kate.html and http://iagenweb.org/boone/history/kateshelley.htm.