December 22, 1956 The first tourist flight to Antarctica took place. The plane used for this trailblazing airborne journey was a DC6B plane of Linea Aerea Nacional (LAN), which was the flag carrier of Chile at that time and is now known as LATAM Chile. United Press (since renamed United Press International) reported a few... END_OF_DOCUMENT_TOKEN_TO_BE_REPLACED

February 4, 1902 The first flights over Antarctica took place as part of a British exploration of that region of the world. The British National Antarctic Expedition, which was led by Royal Navy Captain Robert F. Scott, had departed from England in the wooden ship RRS Discovery in August 1901.  The ship crossed the Antarctic... END_OF_DOCUMENT_TOKEN_TO_BE_REPLACED 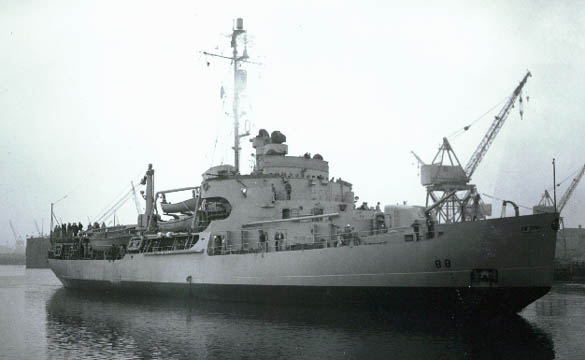 January 17, 1947 The U.S. Navy ship USS Burton Island, which was named after an island off the coast of Delaware, began her maiden voyage from San Diego to the Antarctic region’s Ross Sea. Navy Commander Gerald L. Ketchum was in command of the ship. The 269-foot (82-meter)-long icebreaker was designed by the naval architectural... END_OF_DOCUMENT_TOKEN_TO_BE_REPLACED

October 31, 1956 [Photo courtesy of McDonnell Douglas.] The first-ever aircraft landing at the South Pole took place as a key part of Operation Deep Freeze II, the codename for a series of U.S. missions to Antarctica during 1956-57. The U.S. Navy plane used for this touching down at Earth’s southernmost point was a ski-equipped... END_OF_DOCUMENT_TOKEN_TO_BE_REPLACED