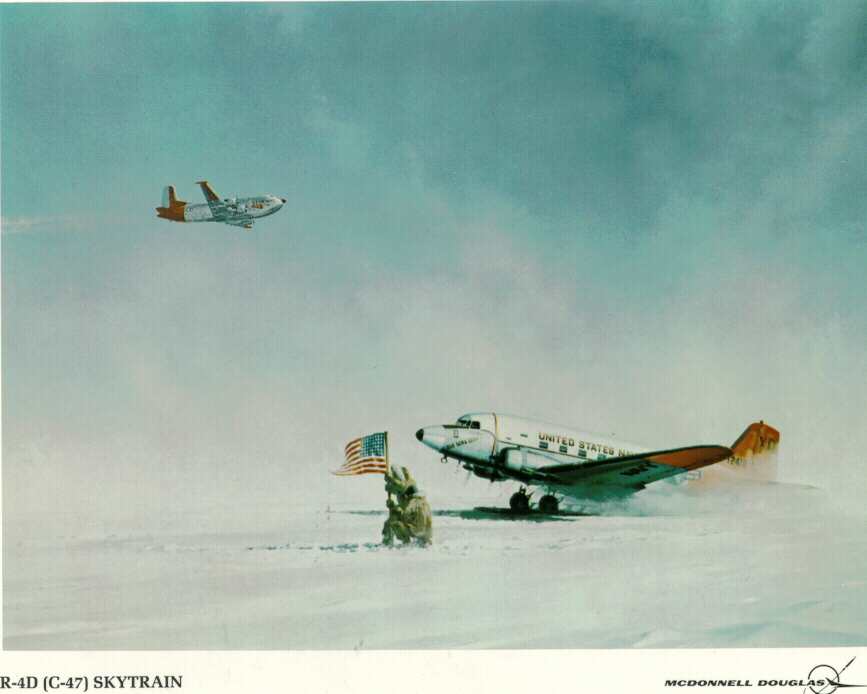 The first-ever aircraft landing at the South Pole took place as a key part of Operation Deep Freeze II, the codename for a series of U.S. missions to Antarctica during 1956-57. The U.S. Navy plane used for this touching down at Earth’s southernmost point was a ski-equipped R4D-5L Skytrain commanded by Rear Admiral George J. Dufek; the aircraft was nicknamed “Que Sera Sera” after a popular song that had been introduced earlier that year in the Alfred Hitchcock movie The Man Who Knew Too Much. The purpose of the flight was to survey the South Pole for the construction of a scientific research station there.

The aircraft reached the South Pole after an 800-mile (1,288-kilometer) journey. Dufek and his crew spent a total of 49 minutes at the South Pole, installing navigational aids to facilitate the future arrival and delivery of equipment and supplies for building the scientific research station.

Along with being the first plane to land at the South Pole rather than just fly over it, Que Sera Sera transported what was only the third group of people to stand at the bottom of the world. The previous parties to accomplish that – Norwegian explorer Roald Amundsen and his men in December 1911 and those men in the ill-fated expedition led by Captain Robert Falcon Scott of the British Royal Navy the following month – had reached the South Pole via sleds.

The success of Que Sera Sera’s mission in that region of Antarctica made possible the Amundsen-Scott South Pole Station that still stands there today. The aircraft is now on display at the National Naval Aviation Museum at Naval Air Station Pensacola, Florida.

Additional information on the first aircraft landing at the South Pole is available at https://en.wikipedia.org/wiki/Operation_Deep_Freeze and http://www.southpolestation.com/trivia/igy1/que.html.