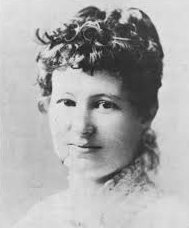 Mary Myers (1849-1932) was a Boston-born professional balloonist (best known as Carlotta, the Lady Aeronaut) and female aviation pioneer. She was married to aeronautical engineer Carl Edgar Myers, and together they devoted a great deal of their energies and expertise to the design and use of passenger balloons.

On Independence Day in 1880, Mary became the first American woman to fly solo in a lighter-than-air balloon. Wearing a blue flannel suit and a sailor’s hat, she launched her late-afternoon flight at Little Falls, New York, while a crowd of 15,000 spectators watched. The flight lasted approximately a half-hour, with her safely landing about 20 miles away in a farmer’s field in Stratford, New York.

From 1880 to 1891, Mary took to the skies hundreds of times for balloon demonstrations in the presence of large crowds. It has been estimated that, during these demonstrations, she ultimately brought more than a 100,000 passengers up into the air with her. In 1888, she established an altitude record for a passenger balloon when she soared four miles high during a flight in Franklin, Pennsylvania. She also set the record for the most one-woman piloted balloon trips which took place during the 19th century.

Far from just allowing herself to just float aimlessly once she was in the skies, Mary controlled the direction of her flights through the careful use of barometer and altitude readings to make the best possible use of air currents. In addition, she and her husband ran a profitable business making and selling balloons at their farm in Frankfort, New York. As a part of this business, the couple developed scientific balloons for the U.S. Weather Bureau to use in examining the weather. Mary and her husband also created military balloon equipment for the U.S. Army Signal Corps to use during the Spanish-American War. They also offered flying lessons at their “balloon farm.” In these ways and others, “Carlotta, the Lady Aeronaut” made indelible contributions to aviation.