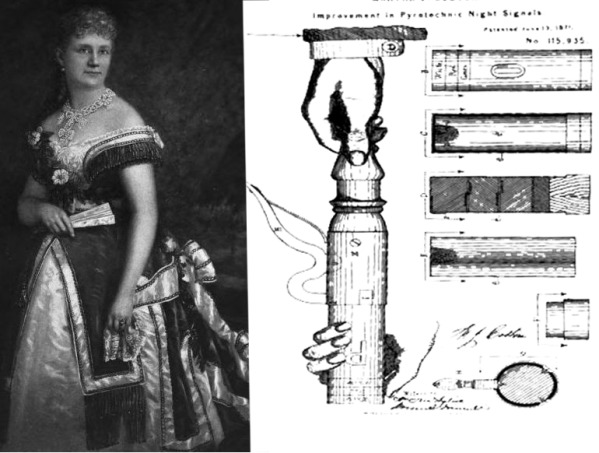 Martha J. Coston made an important contribution to transportation by perfecting and bringing to market a system of maritime signal flares. The Baltimore native was married to Benjamin Franklin Coston, an aspiring inventor who experimented with color-coded night signals as an effective means for ships to communicate with each other and with people on shore. When he died at a young age in 1848, his work on signal flares had not progressed much beyond the blueprint stage.

Martha was now a 21-year-old widow in urgent need of financial support for herself and her children. While going through her late husband’s papers, she came across his research on signal flares. She quickly realized that, while a promising start, his idea for a signaling system still needed a great deal of work before it could become a reality. For about a decade, she sought to more fully develop this system and ended up reaching out to chemists and firework experts for their assistance.

With their help and through her own determined efforts, Martha was able to come up with a truly functional system of multi-colored night flares. She founded the Coston Manufacturing Company to produce and sell these flares on an ongoing basis.

In 1859, Martha obtained U.S. patent number 23,536 for a pyrotechnic night signal and code system. The patent, while identifying her deceased husband as the inventor, was granted to her as the administrator of his estate. That same year, the U.S. Navy – appreciating the value of this new invention – initially ordered a set of 300 flares and subsequently placed larger orders. During the Civil War, the flares were successfully used by the Union Navy during military operations against the Confederacy.

Martha continued to improve the invention and market it throughout the world, obtaining patent 115,935 in 1871 for a twist-ignition device that she devised for the system. Over time, Coston flares were even used at all U.S. Life-Saving Service stations to warn vessels of hazardous coastal conditions and summon rescuers whenever there was a shipwreck.

Martha died in 1904 at the age of 77. Her enterprise, which was eventually renamed Coston Supply Company, remained in operation for about another eight decades.