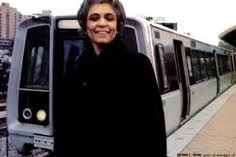 In 1983, Carmen E. Turner made history as the first African-American woman to lead a major transit agency when she became general manager of the Washington Metropolitan Area Transit Authority (WMATA). Her appointment to this position also reflected the overall strides being made by women at the time when it came to assuming key leadership roles in U.S. transportation.

Turner was born in Teaneck, New Jersey, but grew up in the nation’s capital. She began her government career in administrative support positions for various federal agencies. In 1974, she started working for the U.S. Department of Transportation’s Urban Mass Transportation Administration (the present-day Federal Transit Administration). Turner worked as a civil rights officer at UMTA until 1976, when U.S. Transportation Secretary William T. Coleman named her acting director of USDOT’s Office of Civil Rights.

The following year, Turner left USDOT to work at WMATA as its chief of administration. With her promotion to general manager six years later, she found herself running one of the nation’s largest transit systems. Turner earned widespread praise for her management of WMATA during a crucial time for the relatively young agency. Her accomplishments included overseeing a 40 percent expansion of the agency’s Metrorail service from 42 miles and 47 stations to 73 miles and 63 stations. Daily ridership likewise mushroomed in size.

In 1988, the American Public Transit Association (now the American Public Transportation Association) officially recognized WMATA as the nation’s best rail and bus transit system. APTA named Turner as transit manager of the year in 1989.
Another highlight of Turner’s tenure as general manager took place in 1990 when Congress authorized $1.3 billion to complete all 103 miles of the planned Metrorail service. In what she called a “heart-wrenching” decision, Turner left WMATA at the end of the year to become undersecretary of the Smithsonian Institution. “Metro’s been my baby,” she said. “It has a good, solid work force.”

Turner died of cancer at the age of 61 in 1992. WMATA’s maintenance and training facility in Hyattsville, Maryland, was named after Turner in 2003 in recognition of her contributions while leading the agency.