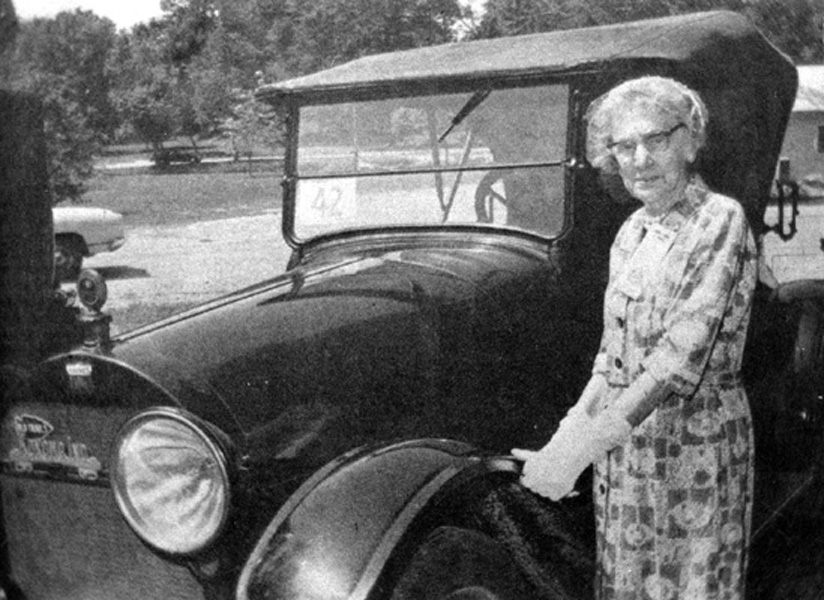 Lifelong Indiana resident Mary E. Landon (1876-1971) was one of the first American women – if not the first American woman – to drive a gasoline-powered automobile. In the late 1890s, she and her husband John moved from South Bend to Kokomo to work there for the automobile manufacturer Haynes-Apperson Company in its new factory. The company, which had been founded a few years earlier by Elwood P. Haynes and the brothers Elmer and Edgar Apperson, was the first Indiana-based producer of the fledgling “horseless carriage.”

John Landon, who was a cousin of the Apperson brothers, helped build automobiles at the factory. As the company’s only female employee, Mary worked as a typist. A large part of her responsibilities involved preparing the driving instructions for each Haynes-Apperson automobile produced and sold.

It was during the summer of 1899 that Mary went from just holding down an office job for the company to serving as a pioneer driver. It all started with a routine trip from the factory to another part of Kokomo. As Mary recounted in a 1965 interview published in the Kokomo Tribune, “One day Elmer Apperson took me downtown for lunch, then told me he wouldn’t be going back to the factory right away.” He instructed her to make arrangements to get his automobile back to the factory.

After having someone crank the motor for her, Mary proceeded to drive the vehicle on her own. As someone who had already typed up numerous instructions on how to operate Haynes-Apperson automobiles, Mary did not find her first experience driving one of those vehicles to be all that difficult or daunting.

Mary recalled that it was “a thrill to drive,” and that the biggest surprise of the trek for her was seeing Elmer Apperson already back at the factory awaiting her arrival. More than six decades later, Mary offered a possible explanation on why he left it to her to bring the vehicle back to work that day. “In his quiet way, I think he did it just to prove that I could drive the car,” she said. As Mary also recalled, “Mr. Haynes told me, just before he died, that I was the first woman to drive a two-cylinder car . . . at least I am until someone proves otherwise!”