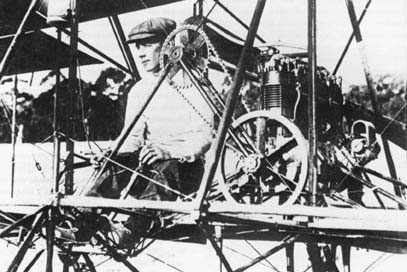 Aviation pioneer John Robertson Duigan was born in the town of Terang in the colony (now state) of Victoria in southeast Australia. In 1902, he went to England and enrolled in the City and Guilds of London Technical College in Finsbury. Duigan earned a certificate in electrical engineering from the college in 1904, and the following year he qualified in motor engineering and driving at Battersea Polytechnic Institute (the present-day University of Surrey) in Guildford. He subsequently worked for the Wakefield & District Light Railway in northern England, returning to Australia by 1908.

It was around this time that Duigan, after seeing a postcard depicting Wilbur Wright’s flight demonstrations in France, developed a strong interest in airborne transportation. Duigan built a glider that was flown on a tether wire in 1909. He then designed and constructed a biplane. This aircraft was the first plane to be built in Australia, and Duigan initially flew it in July 1910 in Victoria’s Mia Mia region for a distance of about 20 feet. That October, he piloted the plane for a longer flight of nearly 200 yards.

Duigan followed up on these inaugural flights of the first Australian-built plane with even longer and higher excursions into the skies. He first flew the plane in public at Bendigo Racecourse in central Victoria in May 1911. The following month, Duigan returned to England and obtained his aviator’s certificate.

A few years later, Duigan enlisted in the Australian Flying Corps during World War I. After military training in England, he saw action in the skies above France and was awarded the Military Cross for gallantry. After the war, Duigan made it back to Australia and worked for a number of years as an electrical engineer. He resumed his aviation career to some extent during World War II, when he served as an inspector of aircraft parts for the Royal Australian Air Force.

Duigan died in 1951 at the age of 69. In 1960, a memorial to him was unveiled near the site of his first flight a half-century earlier.