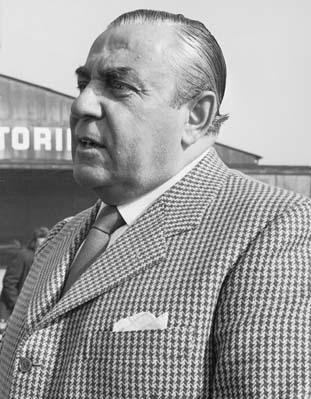 Carlo Abarth, whose accomplishments spanned various modes of surface transportation, died in Vienna, Austria, just a few weeks before his 71st birthday. He had been born Karl Albert Abarth in 1908 in Vienna, which at that time was the main capital of the Austro-Hungarian Empire. When Abarth later became a naturalized Italian citizen, his first name was changed to Carlo.

Abarth’s early transportation pursuits included working in Italy between 1925 and 1927 for the Milan-based company Carrozzeria Castagna, a manufacturer of bodies for vehicles. Abarth designed motorcycles and bicycle chassis for the company. He then worked for the Motor Thun motorcycle plant in the Austrian town of Traiskirchen. A large part of Abarth’s job at Motor Thun involved test-riding motorcycles produced by the company.

Along with these work responsibilities, Abarth started racing motorcycles in competitions throughout Europe. He won his first race on a British-made James Cycle in Salzburg in 1934. Over the next few years, Abarth won several more motorcycle racing championships. This career came to an end, however, due to a racing accident in the city of Ljubljana in Yugoslavia (in the area that is now part of Slovenia) in 1938. Abarth ended up spending most of the next several years in Yugoslavia.

After the end of World War II, Abarth returned to Italy. In 1946, he joined forces with Austrian engineer Rudolf Hruska and Italian businessman and racecar driver Piero Dusio to establish the automobile enterprise Compagnia Industriale Sportiva Italia (CIS Italia, or Cisitalia) in Turin. This company focused on manufacturing sports and racing cars. 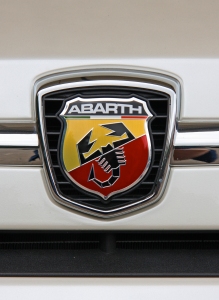 Cisitalia remained in business until only 1949, when its chief financial backer Dusio left Italy for Argentina. Notwithstanding its short-lived existence, Cisitalia strengthened Abarth’s knowledge of the automobile industry and led him to launch a similar venture. Along with racecar driver Guido Scagliarini, he founded the company Abarth & C. in Bologna to produce racing and road cars. Abarth adopted the scorpion, his astrological sign, as the new company’s logo. Abarth & C., which eventually moved its operations from Bologna to Turin, became not just an automobile manufacturer but also a major supplier of high-performance exhaust pipes and other accessories for racing cars. Abarth sold the company to Fiat Automobiles S.p.A. in 1971 and subsequently moved back to his birthplace of Vienna.

For more information on Carlo Abarth, please check out https://en.wikipedia.org/wiki/Carlo_Abarth.