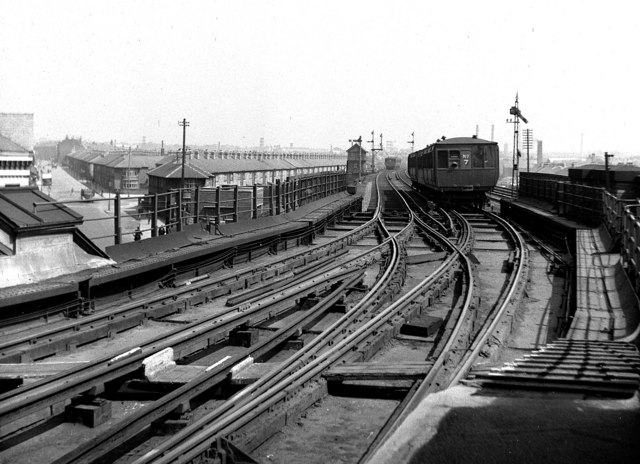 A pioneering railway officially began operations in the city of Liverpool in northwestern England at seven o’clock in the morning. In reporting on the first runs of the railway’s trains that day, the Liverpool Echo noted that “the carriages appear to be fairly well filled with passengers.”

The Liverpool Overhead Railway, which originally spanned five miles (8.1 kilometers) from Alexandra Dock to Herculaneum Dock in the city, was the world’s first electric elevated railway. It was also the first railway to use automatic signaling, electric color signals, and electric multiple units. In addition, stations serving the railway became the first facilities of their kind to have passenger escalators. The Liverpool Overhead Railway also had the distinction of ranking second only to the City and South London Railway elsewhere in England as the oldest electric metro system.

Civil engineers Sir Douglas Fox and James Henry Greathead jointly designed the Liverpool Overhead Railway. Wealthy businessman Sir William Forwood, who played a major role in raising funds for the construction of the railway, was the one who successfully pushed for electricity rather than steam as the means for powering the trains; he felt that steam traction and the ashes it might scatter en route posed too much of a fire risk for the city.

The Liverpool Overhead Railway began operations just a little over a month after the dedication ceremony for the transit service had taken place. A key part of this ceremony involved having Robert Gascoyne-Cecil, 3rd Marquess of Salisbury, turn on the main electrical current for the railway at the generating station at the Bramley-Moore Dock.

Salisbury, who had served twice as British prime minister and would reassume that role one more time a couple of years later, spoke to those in attendance about the new railway’s significance. “I have great pleasure in associating myself in however humble and transitory a manner with this great and splendid undertaking,” he said. “I am glad to be associated with an enterprise which I hope will carry still further the prosperity and power of Liverpool, and which will carry down the name of Liverpool to posterity as the place where a great mechanical undertaking first found its home.”

The Liverpool Overhead Railway remained in service until December 30, 1956, when it ceased operations for reasons ranging from high maintenance costs to a notable drop in ridership. The United Press (UP) reported on the swan song for this railway. The UP account stated, “Hundreds of persons crowded its rickety stations all day for a last sentimental journey on the seven-mile [11-kilometer] dock-side rail line that opened in 1893 as one of Britain’s major wonders.”

For more information on the Liverpool Overhead Railway, please check out http://www.subbrit.org.uk/sb-sites/sites/l/liverpool_overhead_railway/index.shtml.