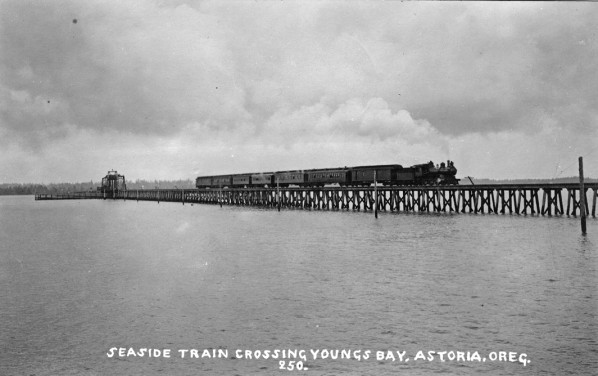 In Oregon, the Astoria and Columbia River Railroad (A&CR) was incorporated to build a long-deferred line connecting the port city of Astoria – located near where the Columbia River meets the Pacific Ocean — with the rest of the United States. The Salem-based Statesman Journal reported, “The capital stock is fixed at $2,000,000, with A.B. Hammond, the Eastern capitalist, Hon. Chas. W. Fulton, of political and legal fame, and Edwin Stone, an expert accountant, and railroad man, as incorporators.”

At the time, the closest railroad terminus was approximately 60 miles (96.6 kilometers) to the east at the community of Goble. Many Astoria residents saw the development of a railroad line linking their city with Goble, which is about 40 miles (64.4 kilometers) west of Portland, as a dream finally come true. The A&CR was completed three years to the day on which the papers for incorporation had been filed. The last spike for the new line was driven at 4:30 that afternoon in the city of Clatskanie. The Salem-based Daily Capital Journal proclaimed, “Astoria is now connected by rail with the outside world.” 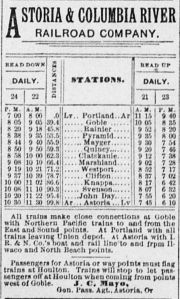 The A&CR did more than just further reduce the comparative isolation of Astoria and help significantly increase its population; it also fulfilled an ever-increasing need for many Portland residents, who were enjoying more discretionary income and leisure time than ever before. The A&CR made it easier for Portlanders to travel to resorts on the Pacific coast for rest and relaxation. Special weekend service provided by the railroad became known as the “Daddy Train,” with businessmen able to leave Portland on Saturday to enjoy time on the coast with their vacationing families and then head back in time for work on Monday. The A&CR also proved valuable as a key means of freight for the timber industry, which grew by leaps and bounds in that region of Oregon. The A&CR remained in service until being merged into the Spokane, Portland and Seattle Railway in 1911.

For more information on the Astoria and Columbia River Railroad, please check out https://www.pnwc-nrhs.org/hs_astoria_columbia.html.

One thought on “Today in Transportation History – 1895: Astoria, Oregon Gets Connected to the World”