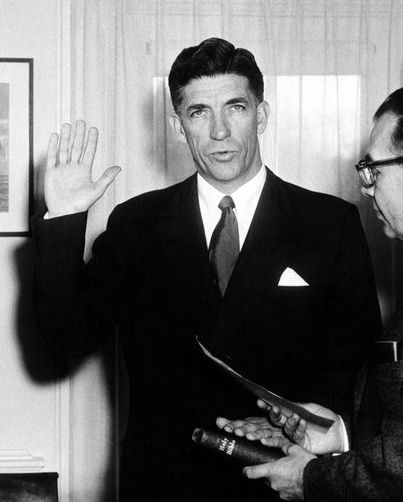 Not long after Najeeb Elias Halaby, Jr., stepped down as administrator of the Federal Aviation Agency (the present-day Federal Aviation Administration), various newspapers carried an Associated Press story about his just-released congressional testimony earlier in the year on a major aviation challenge. “Drunk Flying Among Private Pilots is Serious Problem,” proclaimed the headline in one newspaper featuring Halaby’s testimony.

“We thought that the average pilot, with the amount of experience he had and the respect he had for the elements, just would not drink before flying,” asserted Halaby when he spoke at a hearing of a U.S. House appropriations subcommittee in March 1965. “We now find that one-third of the sampling we have taken of these fatal accidents in the year 1964 were probably under the influence of alcohol.”

In addressing the significance of this problem among the nation’s private pilots, Halaby emphasized the lack of any override mechanism on an airplane to prevent drunk flying. He said, “The airplane does not know whether the driver of the airplane is drunk or sober.” This testimony underscored Halaby’s strong and longtime commitment to aviation issues and the improvement of airborne transportation.

Halaby had been born in Dallas, Texas, in 1915. His father was a Syrian Christian who immigrated to the United States from Syria (at the time a territory of the Ottoman Empire) in 1891. Halaby graduated from Stanford University in 1937 and Yale Law School in 1940.

During World War II, Halaby served as a U.S. Navy test pilot. It was in this capacity that he made aviation history when, in 1945, he completed the first U.S. transcontinental jet flight. This flight, which lasted a total of five hours and 40 minutes, began at Muroc Army Air Field (now known as Edward Air Force Base) in California and ended at the Patuxent Naval Air Station in Maryland.

In 1961, Halaby became only the second person to serve as administrator of the Federal Aviation Agency when President John F. Kennedy appointed him to that position. Along with vigorously pushing for stronger safety measures for the nation’s airplanes, Halaby highlighted how aviation fit within the “big picture” of the U.S. transportation system. He was a leading champion for the establishment of the U.S. Department of Transportation, which finally began operations in 1967.

After leaving the Federal Aviation Agency, Halaby served as CEO and then chairman of Pan American World Airways. He died in 2003 at the age of 87. Halaby has also achieved international fame as the father of Queen Noor of Jordan.

For more information on Najeeb Halaby, please check out https://en.wikipedia.org/wiki/Najeeb_Halaby.