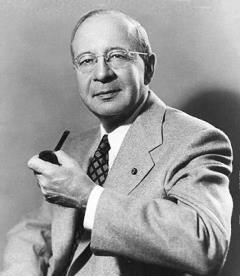 David B. Steinman, a structural engineer who designed a number of notable bridges across the globe, died in New York City. It is not completely clear where he had been born. Several sources indicate that Steinman was born in the town of Chomsk in the present-day Republic of Belarus in 1886 and immigrated to the United States with his family four years later; others sources, however, claim that he was actually born in New York City in 1887.

What is known is that Steinman spent most if not all of his formative years in New York City. He and his family lived in a tenement near the Brooklyn Bridge, which opened in 1883. As a boy, Steinman spent a lot of time playing in the shadow of that bridge. He found the structure to be awe-inspiring, and even called it “a truly miracle bridge.” 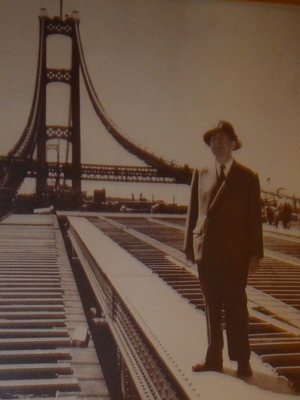 After teaching for a few years at the University of Idaho, Steinman made his way back to New York City and began his work as a structural engineer in earnest. Early on, he assisted renowned civil engineer Gustav Lindenthal on such projects as design and construction of the Hell Gate Bridge (originally known as the New York Connecting Railroad Bridge or the East River Arch Bridge).  Steinman subsequently collaborated with Holton D. Robinson, who had helped build the Williamsburg Bridge, in designing a major bridge in Brazil. The end result of these efforts was the Hercilio Luz Bridge (also called the Florianópolis Bridge), which became South America’s largest bridge at the time of its opening in 1926.

Steinman, combining a strong artistic sensibility with an appreciation for cost-effectiveness, eventually established himself as one of the world’s premier bridge builders. Other significant bridges that he designed were St. John’s Bridge in Portland, Oregon; the Sydney Harbor Bridge in Australia; the Mount Hope Bridge across Narragansett Bay in Rhode Island; the Thousand Islands International Bridge connecting New York with the Canadian province of Ontario; the Kingston-Rhinecliff Bridge over the Hudson River; and the Carquinez Bridge at the northeastern end of San Francisco Bay. During the course of his long career, Steinman also built bridges in England, Portugal, Italy, Haiti, and Iraq.

Many contend that Steinman’s crowning achievement was the Mackinac Bridge, which opened in 1957 and connects the Upper and Lower Peninsulas of Michigan. The “Mighty Mac,” as it is popularly called, is the longest suspension bridge between anchorages in the Western Hemisphere. Steinman also designed the Henry Hudson Bridge, a project that was all the more gratifying because of his doctoral thesis a couple of decades earlier. In 1954, he oversaw the modernization of the Brooklyn Bridge. Steinman took special pride in having his name inscribed with the name of John A. Roebling, the Brooklyn Bridge’s designer, on a commemorative tablet that was placed on the structure.

Steinman had a strong preference for one bridge in particular that he designed, and for many, it was a surprise choice. “If you asked me which of the bridges I love best, I believe I would say the St. John’s Bridge,” he said. “It put more of myself into that bridge than any other bridge.”

Steinman’s other achievements included founding the National Society of Professional Engineers in 1934 and serving as its first president. Steinman was also a prolific and highly regarded writer, and he incorporated his love for bridges in the poetry he penned. Two of his published books of poems were entitled “Songs of a Bridge Builder” and “I Built a Bridge.” One of the lines in his poem “Brooklyn Bridge – Nightfall” proclaimed, “A bridge is a poem stretched across a river, a symphony of stone and steel.”

For more information on David B. Steinman, please check out http://www.asce.org/templates/person-bio-detail.aspx?id=11213.

Information on the collection of his papers housed at New York State Library is available at www.nysl.nysed.gov/msscfa/sc20155.htm.