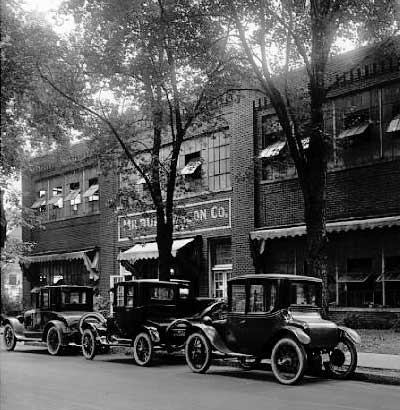 The Milburn Wagon Company was incorporated in Mishawaka, Indiana. The company’s founder was George Milburn, who had been born in England in 1820. Not long after his father’s death in 1835, he and the remaining members of his family left England for what was then British Canada. They settled in the province of Upper Canada (a region that is now part of present-day Ontario), but George Milburn eventually took off on his own and went to the United States in search of work. He became involved in manufacturing wagons in Mishawaka as early as 1853.

During its first several years of existence, the Milburn Wagon Company focused on the construction of wooden wagons for farmers to use for hauling agricultural produce and other goods to market. The company built a variety of horse-drawn vehicles, which were a critical means of transportation for many farmers at the time.

Milburn moved his company’s operations from Mishawaka to a bigger facility in Toledo, Ohio, in 1873, and soon thereafter established the world’s largest manufacturer of farm wagons. The company added buggies to its line of products in 1877 and, over the next couple of decades, began building such other horse-driven vehicles as dump carts and other types of delivery wagons. Even after Milburn’s death in 1883, the company continued to thrive.

With the increasing popularity of motorized transportation during the early 20th century, the Milburn Wagon Company shifted its expertise and energies to that mode of mobility instead. By 1909, the company was building automobile bodies for manufacturers that included Ford, Ohio Electric, Oldsmobile, Overland, Pope, and Willys. 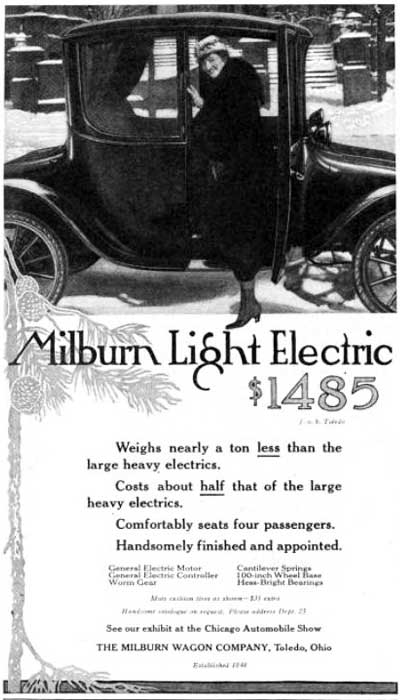 The Milburn Wagon Company ultimately developed and marketed their own motor vehicles, starting with the production of the 1915 Milburn Light Electric automobile in September 1914. The company’s electric automobiles which were all the more distinctive by their elegant design, soon gained nationwide renown. First Lady Edith Wilson became a huge fan of the Milburn Light Electrics; she even persuaded the U.S. Secret Service to purchase a fleet of those automobiles. She also convinced her husband, President Woodrow Wilson, to buy a 1918 model for his own use and enjoyment.

The Milburn Wagon Company ceased operations in 1923. By that time, it had produced approximately 5,000 electric automobiles.

For more information on the Milburn Wagon Company, please check out http://www.coachbuilt.com/bui/m/milburn/milburn.htm.