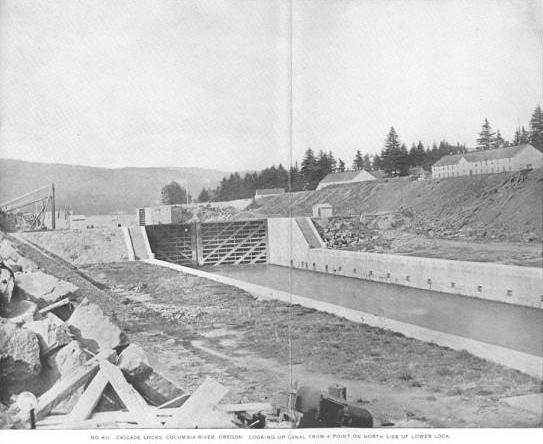 The Cascade Locks and Canal, which were built by the U.S. Army Corps of Engineers, officially opened on the Columbia River between Oregon and Washington. The key reason for the navigation project was the need for more efficient and uninterrupted transportation along the Columbia River to help further develop the economic well-being of Portland, Oregon, and better harness the agricultural and mineral wealth within the river’s basin.

Those traveling along the Columbia River had to contend with a huge and prohibitive obstacle in the form of the Cascades Rapids. Steamboats had to stop short of the rapids and transfer both passengers and freight to railroads to complete the remainder of each journey. The locks and canal were constructed to enable steamboats to pass around the four miles of rapids and not have to worry about coming to a halt in service every time.

The completion of the locks and canal was welcomed with great enthusiasm throughout the northwestern United States and even outside that region. “One of the Most Stupendous Works in the World,” proclaimed part of the headline of a San Francisco Examiner article about the new large-scale transportation infrastructure.

“The locks at the Cascades of the Columbia were thrown open to commerce this afternoon by appropriate ceremonies, participated in by prominent men of Oregon and Washington,” reported the San Francisco Examiner. “At 2:30 the regular river steamers were put through the locks amid the cheers of the assembled crowds, everything working smoothly in every particular.” The wooden sternwheeler Sarah Dixon led that procession of steamboats. Those on board the Sarah Dixon even fired a small cannon in celebration.

The opening of the Cascade Locks and Canal did facilitate water traffic in that part of the world, and the project also marked the first of several major improvements to navigation along the Columbia River. The Cascade Locks and Canal remained in operation until being rendered obsolete in the 1930s with the opening of the Bonneville Dam on the river.

For more information on the Cascade Locks and Canal, please check out https://en.wikipedia.org/wiki/Cascade_Locks_and_Canal.