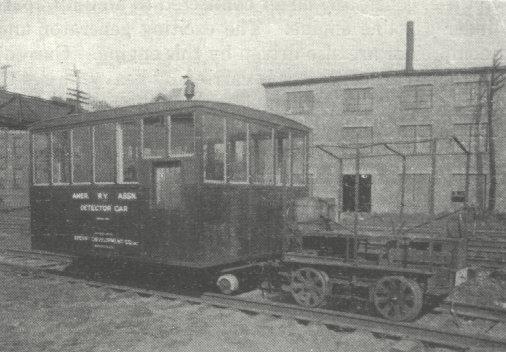 The first commercial use of a rail detector car in the United States took place. Since the advent of the train, a key challenge had been to avert service failures and dangerous derailments along the tracks carrying that mode of transportation. Inventor and entrepreneur Elmer A. Sperry, in response to this challenge, started to work in 1923 on a means to pinpoint potentially lethal fissures in tracks.

The end result of Sperry’s efforts was a rail detector car called SRS 102. This car was put to use on the Wabash Railway between Montpelier, Ohio, and Clarke Junction, Indiana. The car employed an induction method whereby a heavy current was transmitted through the rail to be tested. Search coils were then moved through the resulting magnetic field to find perturbations caused by defects.

SRS 102, during its first run, tested 155 miles (249.5 kilometers) of tracks in two weeks and found an average of 14 defects per day. This new means of testing proved to be a major breakthrough in railroad maintenance and safety.

SRS102 was not Sperry’s only contribution to the world of movement dynamics, however. He also helped produce the first workable gyrocompass for the purpose of better enabling ships to find geographical direction out at sea. This technology has also been applied to help pilot airplanes and spacecraft. In yet another one of Sperry’s transportation-oriented achievements, he was the first person to drive an American-built automobile in Paris.

Additional information on SRS 102 and other innovations in rail inspection are available at https://www.nde-ed.org/AboutNDT/SelectedApplications/RailInspection/RailInspection.htm.

For more information on Elmer A. Sperry, please check out http://www.nasonline.org/publications/biographical-memoirs/memoir-pdfs/sperry-elmer.pdf.