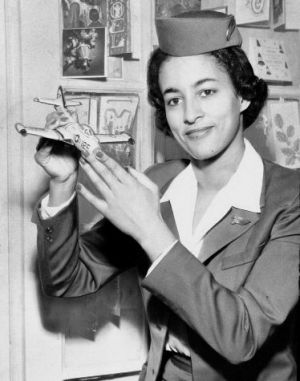 In February 1958, Ruth Carol Taylor became the first African-American to serve as a flight attendant in the United States. Her duties involved taking charge of passenger safety and comfort on a Mohawk Airlines flight from Tompkins County Airport in Ithaca, New York, to New York City.

Taylor graduated as a registered nurse from the Bellevue School of Nursing in 1955. After working for a few years as a nurse and then an employee of the New York City Transit Authority, she decided to pursue a career as a flight attendant — a position widely termed “stewardess” at that time – and more specifically the first African-American flight attendant.

Taylor initially sought to become flight attendant with Trans World Airlines (TWA), but her application was rejected. When regional carrier Mohawk Airlines signaled an interest in hiring minority flight attendants, Taylor became one of approximately 800 African-Americans to apply for the position.

Mohawk Airlines hired Taylor for that pioneering role in December 1957, and in the process broke a color barrier that had been in place in the U.S. aviation industry since flight attendants were introduced on the nation’s planes more than a quarter-century earlier. (Three months after Taylor’s history-making flight between Ithaca and New York City, TWA hired Margaret Grant as the first African-American flight attendant for a major U.S. airline.)

Six months after she began serving on flights, Taylor had to resign from Mohawk Airlines after getting married; in keeping with standard practice among U.S. airlines at that time, the company required that its flight attendants remain single. Notwithstanding her short tenure with Mohawk Airlines, Taylor established a major precedent for African-Americans during her time as a flight attendant. In 2008, Taylor was formally recognized by the New York State Assembly for her key role in further integrating U.S. airlines.

For more information on Ruth Carol Taylor, please check out https://en.wikipedia.org/wiki/Ruth_Carol_Taylor and https://www.blackpast.org/african-american-history/taylor-ruth-carol-1931/.