The first successful demonstration of a full-sized electric locomotive took place in the Washington, D.C., area. The railroad car, equipped with an electric storage battery, had been built by Dr. Charles Grafton Page.

Page was born in 1812 in Salem, Massachusetts. His father was a sea captain. Early on in life, he developed a powerful interest in electricity. At age nine, he climbed onto the roof of his family’s home with a shovel to catch electricity during a thunderstorm. When he was 10, he built his own electrostatic machine and then used it to administer electric shocks to his friends.

Page attended medical school and, after graduating, he continued to live with his parents and opened a medical practice there in Salem. He stayed relentlessly curious about electricity, though, and kept conducting experiments with that natural form of energy.

The doctor and his family eventually left Salem after his father retired from a life at sea. They resettled near Washington, D.C., in northern Virginia in 1838. As a longtime area resident, he would hold down several jobs. He set up a new medical practice, for example, and served a couple of stints as an examiner at the U.S. Patent Office. In addition, Page was a chemistry professor at Columbian College (present-day George Washington University).

He also maintained his enthusiasm for electrical experiments. This enthusiasm, which seemed to grow stronger after he moved to the Washington region, led him to develop an innovative means of transportation that he called the Electro Magnetic Locomotive. 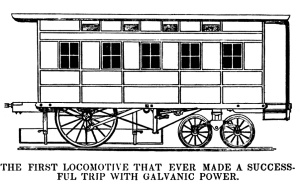 The test run for this locomotive occurred on a springtime Tuesday, with Page and an engineer named Ari Davis leaving Washington on the 21,000-pound (9525.4-kilogram) railroad car with several passengers on board. While Page originally planned to take the locomotive about 40 miles (64.4 kilometers) east to Baltimore and then back to Washington, the eastbound trip was cut short at the Maryland town of Bladensburg (approximately nine miles, or 14.5 kilometers, outside the nation’s capital) due to several problems that arose on board.

One of the major setbacks involved short-circuiting that came about when high-voltage sparks broke out through the insulation of the electrical coils. “Another serious difficulty encountered,” Page wrote shortly after the trip, “was the breaking of the porous cells in the battery, causing a mixture of [the] acids, and the interception of a large portion of the power.” Page and Davis tried their best to repair these defects en route but ultimately had to forget about making it to Baltimore and instead maneuver the locomotive back to Washington after arriving in Bladensburg.

Despite its problems on this test run, the locomotive – traveling as fast as 19 miles (30.6 kilometers) per hour and managing to reach Bladensburg in 39 minutes – proved to be not only successful but consequential. “Rapid Progression of Electro Magnetic Power,” announced the headline for a Weekly National Intelligencer piece highlighting the experimental trek. Above all else, Page’s demonstration of his locomotive marked a milestone in the replacement of steam with electricity as the way to propel vehicles forward.

For more information on Dr. Charles Grafton Page and his 1851 test run of an electric locomotive, please check out https://en.wikipedia.org/wiki/Charles_Grafton_Page.