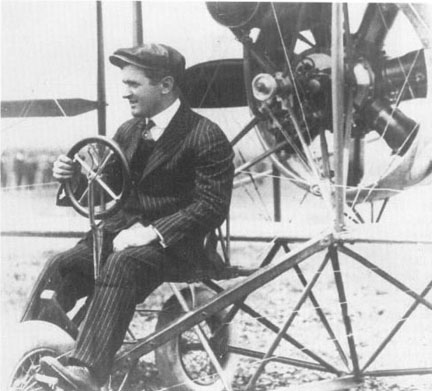 Let’s just say that it wasn’t your typical workday in Washington, D.C. . . . Daredevil aviation pioneer Lincoln Beachey left a lasting impression on many as he steered his airship above and even alongside various landmark buildings in the nation’s capital. The next day’s edition of the Washington Post called this trip through the skies “the most successful flight in the history of aerial navigation.” (The person who built and owned this airship was aeronautical engineer and aviator A. Roy Knabenshue.)

The 19-year-old Beachey had made his first flight in an airship just the year before, and his memorable excursion over Washington, D.C., would help establish him as one of the most famous aviators of the pre-World War I era. By eleven o’clock on that memorable Thursday morning, Beachey had begun attracting widespread attention throughout the city. A large number of people witnessed the flight with pure amazement.

“Drivers left their delivery wagons full of groceries standing wherever they happened to be and ran for the most convenient places to see the airship,” reported the Washington Post. “Clerks dropped their pencils, stenographers deserted their typewriters, and the windows of office buildings were stuffed full of persons craning their necks to see the daring young sky pilot as he coolly rode along on his lofty perch, steering the vessel at his will and waving back at the thousands of hats and handkerchiefs he saw down where the world was.”

After landing the airship on the grounds of the Washington Monument for a little while, Beachey took to the skies again and circled around that structure. He then steered the airship directly towards the White House. Beachey made his way onto the lawn in what was the first-ever aircraft landing on White House property. Unfortunately, however, Theodore Roosevelt wasn’t there to greet his airborne visitor; the president was a couple of miles away at the time attending a graduation ceremony at Georgetown University.

Beachey subsequently flew the airship straight down Pennsylvania Avenue towards the U.S. Capitol. He circled that building and then landed in front of its east steps, where lawmakers, congressional staff members, and a host of other onlookers surrounded and greeted him. “For a good part of the day there was literally but one subject of conversation in Washington, and that was the successful flight of the airship,” reported the New York Times.

Additional information on Lincoln Beachey’s airship flight over Washington, D.C., is available in the 21 June 1906 issue of The Automobile magazine at Aerial Navigation at the Capital.

For more information on Lincoln Beachey, please check out https://www.nationalaviation.org/our-enshrinees/beachey-lincoln/ and https://www.hill.af.mil/About-Us/Fact-Sheets/Display/Article/397531/lincoln-beachey/.