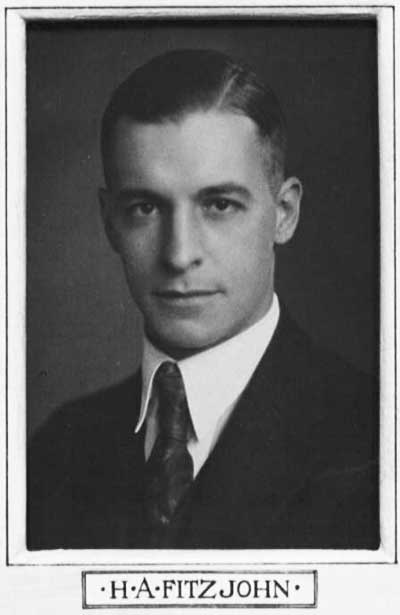 Transportation entrepreneur Harry Alphonse FitzJohn, who played an innovative role in the production of bus and truck bodies, was born in Toledo, Ohio. In 1905, FitzJohn began working for the U.S. Department of Agriculture as a messenger for its Weather Bureau. He stayed in that job until 1907, when he moved to Detroit to work for the Cadillac Motor Car Company as a clerk. Over the next decade, he was hired for various other Michigan–based positions in the automotive industry. These positions included production manager for the Continental Motors Corporation; Detroit purchasing agent for the Springfield Body Corporation (headquartered in Massachusetts); and purchasing agent for the Hayes-Ionia Auto Parts Manufacturing Company.

After the U.S. entry in World War I in 1917, FitzJohn assumed a new type of transportation role. He served as production manager of the Dayton-Wright Airplane Company in Dayton and in this capacity he helped oversee the development of large numbers of aircraft for the war effort. FitzJohn remained with the company until a few months after the war ended. By this time, Fitzjohn had gained considerable experience in manufacturing. He then helped establish a new automotive firm in the fall of 1919, along with Thomas H. Hume and Walter C. Powell, both of whom were officers and directors of a clothing business called Amazon Knitting Company; and engineer Lewis B. Erwin. Their joint automotive enterprise was officially named the FitzJohn-Erwin Manufacturing Company.

The company (widely known at the time as “Fitz-Er”) initially focused on the construction of truck cabs as well as truck and bus bodies for the Lansing-based REO Motor Car Company. One routine practice for Fitz-Er involved shipping the truck and bus bodies to REO dealers both unassembled and crated as a way to save on delivery and storage costs. Fitz-Er also provided such automobile accessories as battery boxes. Fitz-Er eventually also began manufacturing chassis for the Ford Motor Company.

By 1921, Erwin left the company for other professional opportunities. The business was consequently rebranded as the FitzJohn Manufacturing Company. During the next several years, the company continued to grow in both productivity and reputation.

On New Year’s Day in 1929, the FitzJohn Manufacturing Company stopped selling its bus and truck bodies via chassis manufacturers and automobile dealers and instead started selling directly to customers. At around this time, the Michigan Manufacturer and Financial Record highlighted the company’s overall significance in the industry. “The FitzJohn Manufacturing Company is one of the pioneers to engage in bus body building and manufactures exclusively bus, moving van, and panel bodies,” this publication reported. “In addition to being a pioneer in bus body building, the FitzJohn Company was particularly active in advancing the standardization of parts.”

Unfortunately, however, the FitzJohn Manufacturing was soon hammered by the Great Depression. The company’s sales dropped sharply in 1930, and the following year was even worse. The company entered receivership and, as part of the reorganization process, Harry FitzJohn was forced out of the company that he helped form a dozen years earlier and which bore his name. (The company would continue to bear his name until shutting down operations altogether in the late 1950s.)

After being forced out of the company, Harry FitzJohn stayed active in the industry. He helped design a 12-to-15 passenger parlor coach for the Illinois-based transit service Safe Way Lines, for example and worked as a sales engineer for General Motors Truck Company’s Yellow Coach division. He also served as sales manager for the passenger bus manufacturing firm General American Aerocoach Company of Chicago. FitzJohn died in Tinley, Illinois, in 1967 at the age of 77.

For more information on Harry A. FitzJohn and his namesake company, please check out http://www.coachbuilt.com/bui/f/fitzjohn/fitzjohn.htm.