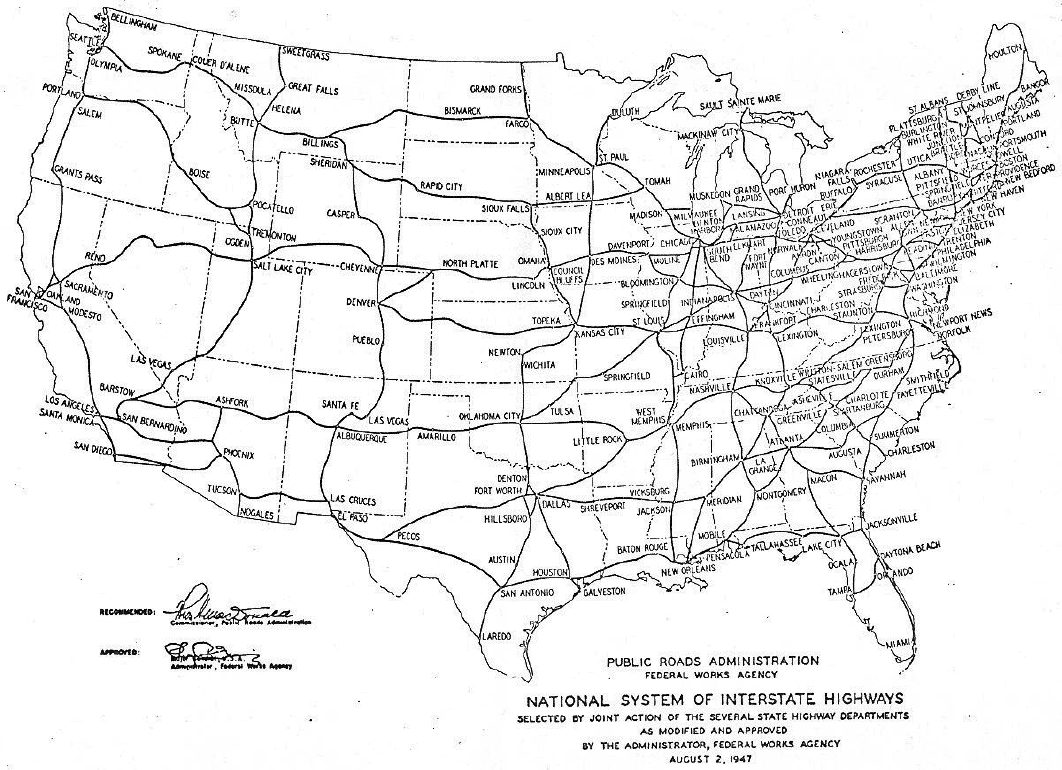 About nine years before President Dwight D. Eisenhower signed into law the bill formally establishing the Interstate Highway System, the general locations of the first designated routes for that proposed network were announced. This announcement was made by Major General Philip B. Fleming, administrator of the Federal Works Agency (which included the Public Roads Administration); and Thomas H. MacDonald, commissioner of the U.S. Bureau of Public Roads.

These first designated routes of what was characterized at the time as the National System of Interstate Highways came to a total of 37,681 miles (60,641 kilometers), including 2,882 miles (4,638.1 kilometers) of urban thoroughfares. The remaining mileage of the planned 40,000-mile (64,373.8-kilometer) network that had been stipulated in the Federal-Aid Highway Act of 1944 was reserved for auxiliary urban routes.

As outlined in a map prepared in advance of the announcement, the new system for what were then 48 contiguous states consisted of the following: a crisscross of lines touching most of the larger cities in the eastern part of the country; and four trunk highways overlapped by four more out in the west. The map confirmed the principal cities to be connected by those highways – a headline in the West Virginia-based Charleston Gazette proclaimed “U.S. Super-Road Project to Link All Major Cities” – but did not include any exact routes or even numbers for this widespread network.

The general locations for these proposed highways had been submitted for the most part by the state highway departments after numerous conferences between state and federal road officials to work out disputes on such matters as alternate routes and connections at various state boundaries.

“This interstate system is utterly different from the astonishingly speculative projects of the superhighway planners of the 1930’s,” asserted Better Roads magazine in its assessment of the planned routes for the new network. “It is intended to be developed to standards suited to needs.” The magazine also noted, “Without a whiff of motorway magic, designers of the interstate system may produce something pretty impressive in its own logical way.”

Additional information on milestones in the development of the Interstate Highway System is available at https://www.fhwa.dot.gov/programadmin/interstate.cfm.