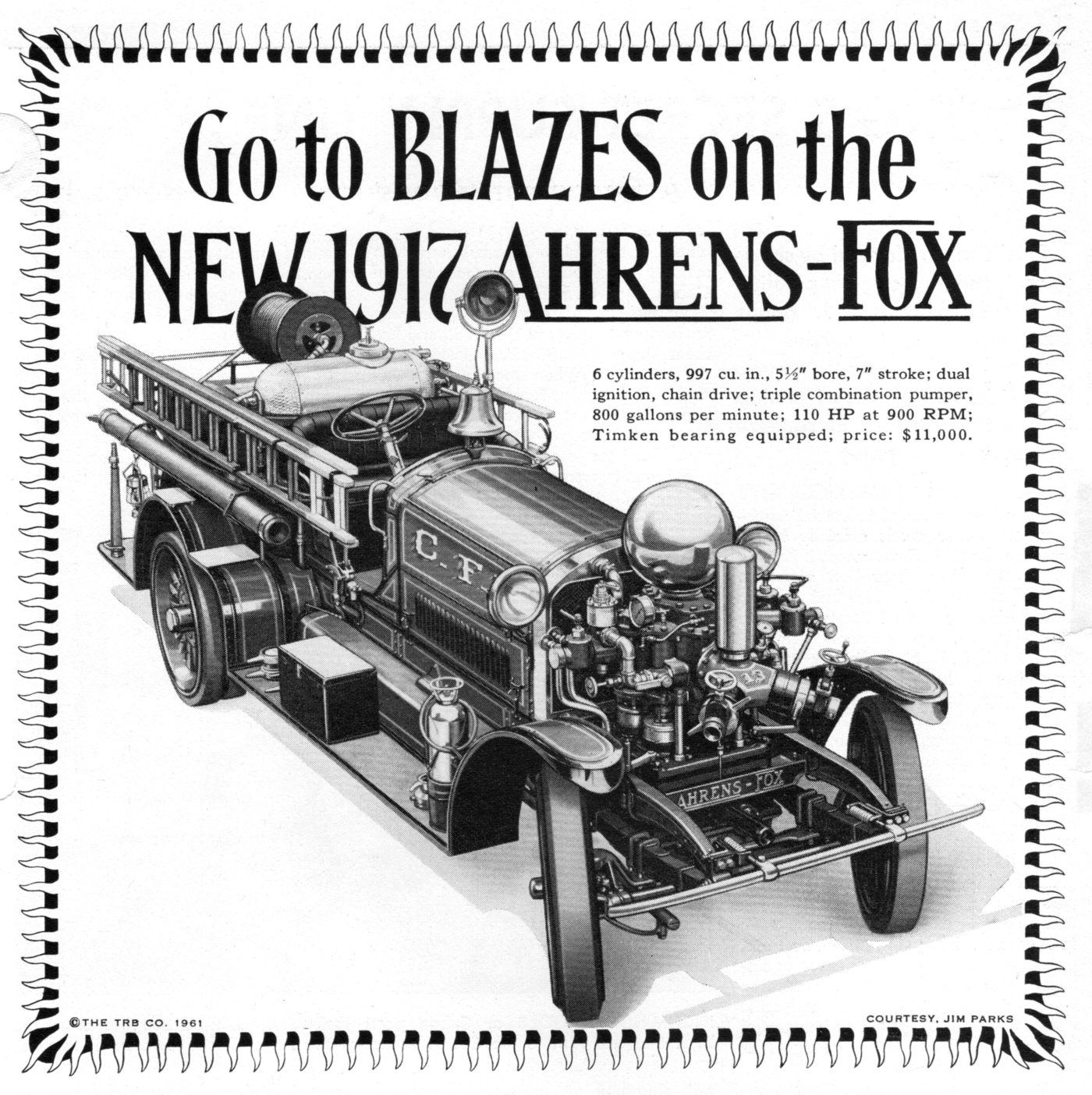 In Cincinnati, the Ahrens Fire Engine Company – a firefighting vehicle manufacturer that had been formed in 1868 from a machine shop bought out by ambitious German immigrant Chris Ahrens – was reorganized as the Ahrens-Fox Fire Engine Company. Chris Ahrens’ son John was designated vice president of this restructured family enterprise. John Ahrens’ brother-in-law Charles H. Fox, assistant chief of the Cincinnati Fire Department, became president of the company. George W. Krapp, another brother-in-law, assumed the duties of treasurer.

The revamped company not only sustained the high quality of the Ahrens family’s work over the previous four decades but also quickly became a major force in the fire engine industry in terms of innovations and performance. The company introduced its first gasoline-powered fire engine in 1911 and stopped producing horse-drawn vehicles altogether the following year. The Ahrens-Fox Fire Engine Company established a strong reputation both nationwide and across the globe for fire trucks that proved to be durable and contained state-of-the-art equipment. For approximately six decades starting in 1915, New York City’s fleet of firefighting vehicles included dozens of trucks built by the Ahrens-Fox Fire Engine Company.

One of the key contributions made by the Ahrens-Fox Fire Engine Company took place in 1923 when it introduced a double-banked ladder rack for fire trucks.  Since the rack allowed ladders to be stacked side-by-side, it lowered a truck’s center of gravity and therefore lessened the chance of the vehicle tipping over while making sharp turns. Another company innovation was the world’s first quadruple combination fire truck (or “quad”), which made its debut in 1927 and brought together in one vehicle a pump, hose, water tank, and ladder rack.

The Ahrens-Fox Fire Engine Company remained in operation until encountering major financial hardships in 1953. Curt Nepper, the company’s chief engineer at the time, bought what remained of the business. Over the next 37 years, he continued to supply Ahrens-Fox spare parts to fire departments throughout the world. The company’s surviving assets are now officially owned by W. Kenneth Menke III, president of the Fire Products Company in Missouri. The Ahrens-Fox name, though, is licensed to the Michigan-based truck manufacturer Hendrickson Mobile Equipment.

Additional information on the Ahrens-Fox Fire Engine Company is available at http://www.coachbuilt.com/bui/a/ahrens_fox/ahrens_fox.htm.