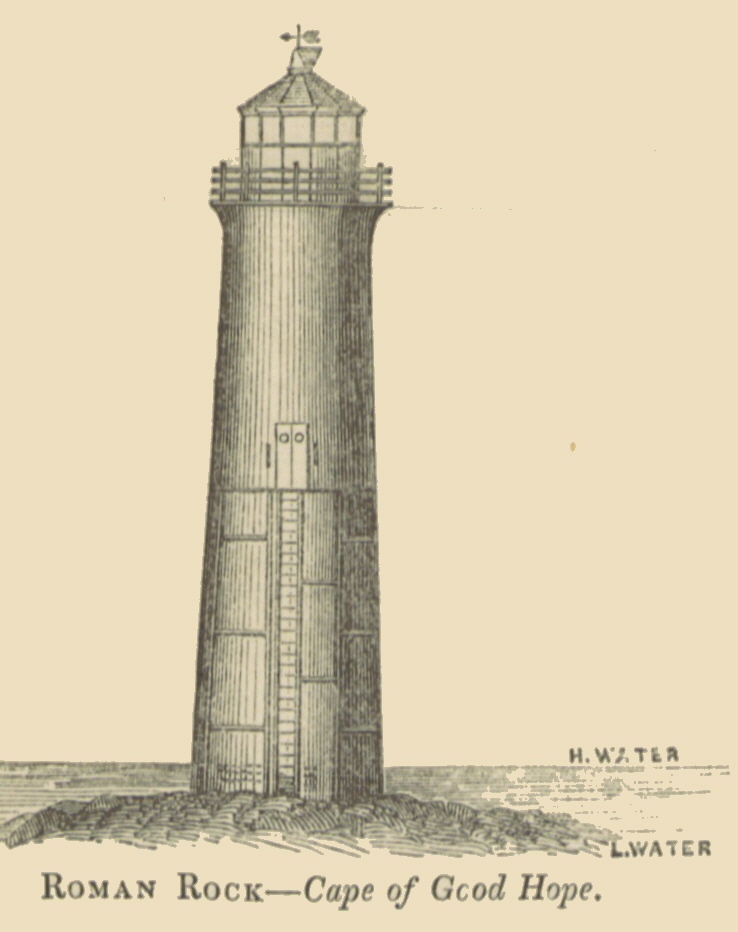 A new lighthouse went into service on a huge rock located in False Bay (a body of water in the Atlantic Ocean) and near Simon’s Town in the present-day Western Cape province of the Republic of South Africa. (At the time of the lighthouse’s debut, this region was part of the British colony known as the Cape Colony; this colony and three others were combined in 1910 to form the Union of South Africa.) The rock on which the lighthouse was built is called Roman Rock, which most likely owes its name to the large number of Red Roman fish inhabiting that section of False Bay.

Roman Rock Lighthouse, measuring 46 feet (14 meters) in height, was constructed to help safely guide British Royal Navy ships making their way through False Bay and into Simon’s Town harbor at night. The lighthouse was designed by Alexander Gordon of the British Lighthouse Authority. Gordon, a prolific civil engineer, also designed lighthouses for such other parts of the world as Ceylon (now known as Sri Lanka), Australia, Chile, Canada, Jamaica, Barbados, and the Bahamas.

The construction of Roman Rock Lighthouse proved to be an eminently difficult endeavor due to the often fierce waters and winds besieging that area. It took four years to complete the structure, with only 96 actual working days during that entire timeframe. The stones for the lighthouse were quarried from Seaforth Beach at Simon’s Town. The original means of illumination for Roman Rock Lighthouse was designed by London-based lamp manufacturer James De Ville, and it consisted of a revolving platform that carried eight single-wick oil burners set in polished metallic reflectors. These burners completely rotated every four minutes.

This lighthouse is the only one in the vicinity of what is now South Africa to have been built on a single rock, and it also has the distinction of being one of the few lighthouses anywhere across the globe to exist on a rock in the ocean. The comparatively desolate locale for Roman Rock Lighthouse, coupled with the frequently turbulent weather conditions there, made the job of operating the structure anything but glamorous.

The first lighthouse’s first head keeper, John Williams, and his two assistants were paid higher-than-average salaries for the hardship duty of working on Roman Rock. Two of the men would routinely work together at the lighthouse while the third one remained on shore. On an alternate basis among the three of them, the man on shore would trade places with one of the other two every seven days. Just about the only recreational pursuit available on Roman Rock for these keepers and the men who subsequently operated the lighthouse was fishing, an activity that undeniably required careful advance planning and tremendous skill because of everything from high tides to gale-force winds.

The need for keepers at this generally inhospitable site became a thing of the past when the original lighting system was replaced during the 1910s by acetylene gas cylinders that provided automatic flashes every six seconds. Roman Rock Lighthouse was electrified in 1992 at the request of the South African Navy (SAN). With SAN’s largest naval base now situated at Simon’s Town, the lighthouse continues to serve as an important navigational aid for the region.

Additional information on Roman Rock Lighthouse and other lighthouses in the western part of South Africa is available at https://www.ibiblio.org/lighthouse/zaf.htm