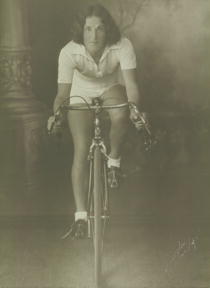 The Edna Sayers Bridge, consisting of both a cycleway and pedestrian bridge, made its debut in the Central Coast region of the Australian state of New South Wales (NSW). This structure spans across Saltwater Creek in the suburb of Long Jetty, and it was named in honor of a widely acclaimed cyclist. A longtime resident of that part of Australia, Edna Sayers was 70 when the structure named after her was inaugurated. She attended the dedication ceremony, cutting a ribbon to officially open the bridge to traffic and unveiling a plaque that commemorates her cycling achievements.

Sayers was born in 1912 in Inner West Sydney’s suburb of Earlwood. The oldest of six children, she took on the responsibility of helping to raise her siblings after their mother died in 1927. Sayers eventually started cycling in her spare time, and she found this activity to be a welcome respite from her considerable domestic duties. (Her father was likewise an avid cyclist.) She also enjoyed hiking.

With a great deal of determination, Sayers continued to refine her cycling skills and even found time every Monday night to train with the Earlwood Cycling Club. Even though cycling was still largely regarded as something better suited for males only, Sayers established herself as a formidable competitor in various races.

“What sort of a girl is she?” asserted the Sydney-based newspaper Truth in a 1933 article. “This blue-eyed, wavy-haired youngster with the dazzling smile keeps house for her widowed father, and mothers [five] smaller children, milks the cows, mends their clothes . . . and collects cycling and roadwalking marathon records as a hobby.”

That year, Sayers more than proved her stamina and pedaling abilities when she completed a race of 129 miles (207.6 kilometers) between Goulburn and Sydney in seven hours, 41 minutes, and five seconds – a world’s record for a female amateur. “Trailed by a detachment of exhausted male riders, Edna came to the finish line smiling,” reported the Truth. “Some of the male riders were given stimulants of brandy as they pulled up panting.”

In her later years, Sayers continued to pursue her love of cycling even after she was no longer competing in races. After moving from Earlwood to Budgewoi in her sixties, she organized a women’s cycling club in that Central Coast suburb and would lead her fellow members in tours of the area. Sayers died a little over 14 years after the bridge bearing her name in Long Jetty was opened.

For more information on the opening of the Edna Sayers Bridge, please check out http://www.photosau.com.au/Canterbury/scripts/ExtSearch.asp?SearchTerm=100355.

Additional information on Sayers is available at https://en.wikipedia.org/wiki/Edna_Sayers and http://www.photosau.com.au/Canterbury/scripts/genericIncluder.asp?filename=info/SayersEdna.