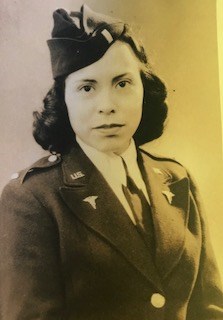 As a nurse, Maria Esperanza Garcia Roach was one of an estimated 400,000 to 500,000 Hispanic Americans who served in the U.S. Armed Forces during World War II. Her own lifesaving role in this global conflict very much depended on airborne transportation.

Maria was born on July 16, 1915, in the city of Piedras Negras in Mexico to U.S. citizens and medical missionaries Alberto G. Garcia, MD, and Eva Garcia, RN. Not long after Maria was born, she and her family left Mexico to settle in Austin, Texas. Dr. Garcia became the first U.S.-trained Mexican American physician to practice medicine in the state capital of Texas. Both of Maria’s parents staunchly championed social justice and equality for the Mexican American community in Austin. One of their key means of advocacy in this regard was their establishment and publication of La Vanguardia, the first Spanish-language newspaper in Austin.

Maria was clearly influenced by her parents’ medical backgrounds as well as their strong concern for the welfare of others. After attending the University of Texas at Austin, Maria trained as a nurse anesthetist at Charity Hospital in New Orleans. She was serving there as an instructor in anesthesiology for physicians and medical students from the Tulane University School of Medicine when the United States entered World War II on the side of the Allies.

With the outbreak of war, Maria volunteered her nursing services with the U.S. Army Air Forces (USAAF), and initially, she was set to accompany a medical unit from Tulane University for deployment to a field hospital in a combat zone. As it turned out, however, Maria was instead assigned to a training program at Bowman Field in Kentucky for the USAAF’s fledgling medical/air evacuation service. This service centered on retrieving critically wounded soldiers from battlefields and transporting them via planes to hospitals away from combat zones for emergency medical treatment. Maria was selected for the medical/air evacuation service not only due to her nursing qualifications but also because she had earned her license as a pilot at the New Orleans Municipal Airport in 1938.

Maria successfully completed her training at Bowman Field, and from October 1943 to March 1945, she served as both a nurse and pilot during various military medical evacuation operations across the war-torn globe. A May 1945 article in the Austin American-Statesman reported, “An army nurse, she has been overseas for 19 months and has served in China, Burma, India, Africa, Italy, France, Germany and England and on numerous islands in the north and south Atlantic assisting in the air evacuation of sick and wounded soldiers.” While carrying out these duties, Maria was responsible for the welfare of more than 1,500 wounded servicemen altogether. In addition, she logged a total of 1,000 hours of flying time as a pilot during the air evacuations.

Maria’s wartime efforts earned her several honors, including the Air Medal. Notwithstanding her far-flung and high-risk service as a military nurse, she also found time during the war to meet, fall in love with, and marry Edward Hugh Roach of the British Colonial Administrative Service. By the early 1950s, they had moved from the United States to Canada and lived there for the remainder of their lives. He passed away in 2005.

Maria died on March 27, 2018, at the age of 102, and both her resiliency and wartime accomplishments were highlighted at that time. “Maria Roach’s strength and vitality carried her throughout more than a century of living,” noted one of her nieces. This niece also wrote, “To you, Aunt Maria, we salute you, we send you off into the next great unknown with joy, with blessings, with thanks for making our world that much better with your laughter, your kindness, your zest for living.”

For more information on Maria Esperanza Garcia Roach and other Hispanic Americans in World War II, please check out https://en.wikipedia.org/wiki/Hispanic_Americans_in_World_War_II.

Additional information on the service of U.S. flight nurses during World War II can be found in  The Story of Air Evacuation, 1942-1989 at http://legendsofflightnurses.org/TheStoryOfAirEvacuation/FullText.pdf (Maria Roach is profiled on page 148 of this publication).