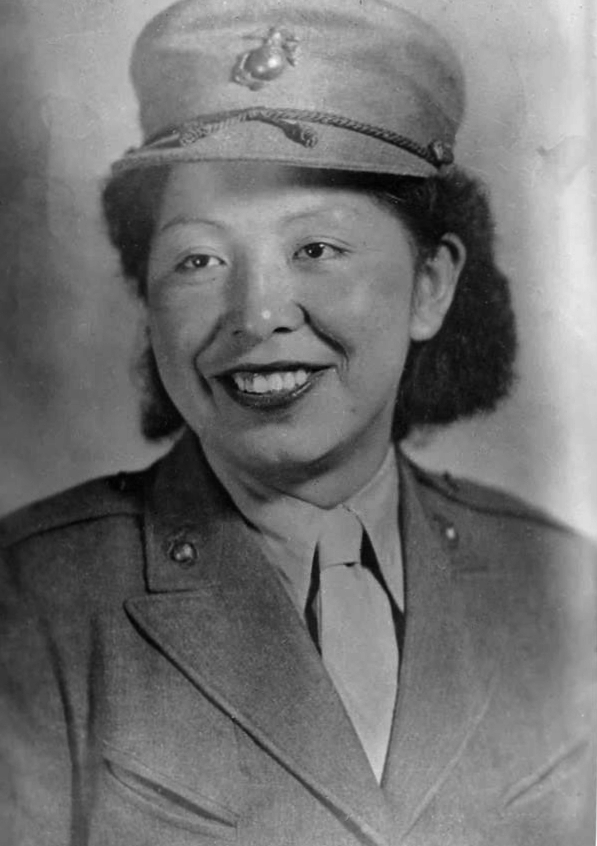 During World War II, Minnie Spotted-Wolf became the first Native American woman to enlist in the U.S. Marine Corps (USMC). She further distinguished herself through her various transportation-oriented duties and accomplishments during her time in service.

A member of the Blackfeet Tribe, Spotted-Wolf was born near the community of Heart Butte in western Montana in 1923. Her father owned a ranch about 15 miles (24.1 kilometers) northeast of Heart Butte, and she grew up helping out with many of the chores that needed to be done on that property. This work included cutting fence posts, training horses, and raising sheep and cattle. Another part of Spotted-Wolf’s regular work regimen on the ranch – and one that proved to be a crucial skill for her after she left the Big Sky Country for the larger world – involved driving a two-ton (1.8-metric ton) truck.

With the United States very much immersed in World War II by 1943, Spotted-Wolf sought to enter the military to help out in the global fight against the Axis powers. She initially encountered resistance to her efforts to enlist, with one recruitment officer telling her that the war was “not for women.” Spotted-Wolf persisted, though, and she was eventually accepted into the USMC Women’s Reserve. (This World War II women’s branch of the USMC Reserve had been authorized in 1942.)

Despite the recruitment officer’s pessimistic tone, Spotted-Wolf had no problem adjusting to military life and making the most of it. All of the work she did day in and day out on her father’s ranch, for example, prepared her well for the rigors of Marine boot camp. Spotted-Wolf later characterized that part of her military training as “hard but not too hard.”

After completing boot camp, Spotted-Wolf went on to serve at military bases in both California and Hawaii. A great deal of her service at those locations entailed driving trucks loaded with heavy equipment, even though that type of work often done exclusively by men. Spotted-Wolf, who weighed only 110 pounds (49.9 kilograms), more than held her own in carrying out those challenging transportation responsibilities. The heavy-duty vehicles that she most likely drove as a Marine reservist included the International M-5H-6 and Chevrolet WA trucks. As further testimony to her considerable abilities behind the wheel, Spotted-Wolf was also a driver for generals and other high-ranking officers who visited the bases where she was assigned.

Spotted-Wolf’s skills and pioneering status earned her plenty of renown during the war. She received extensive media coverage, with one article featuring the flamboyant headline “Minnie, Pride of the Marines, Is Bronc-Busting Indian Queen.” There was even a comic book featuring her.

After being discharged from the military in 1947, Spotted-Wolf returned to Montana. She married a farmer named Robert England, with whom she had four children. Spotted-Wolf also pursued a longtime career as a teacher, earning a two-year degree in elementary education in 1955 and a B.S. degree in elementary education in 1976. She taught for nearly three decades at reservation schools in Montana.

Even with a busy personal and professional existence, however, Spotted-Wolf continued to remember and cherish her USMC service. After her death in 1988 at the age of 65, she was buried in her military uniform.

In August 2019, a section of U.S. Highway 89 in Montana was dedicated in her honor as Minnie Spotted-Wolf Memorial Highway. The many people attending the ceremony included her family as well as members of the Blackfeet Tribe. The Montana state legislature measure that authorized naming that section of the highway after her highlighted how her “ranch working experience served her well as a heavy equipment operator and driver for the United States Marine Corps.”

Spotted-Wolf’s pride in both her heritage and military career was underscored by her daughter Gerardetta England in an interview with the Great Falls Tribune. “She wasn’t in the military just for herself but for the Indian people,” said England. “She wanted others to know who she was and where she came from.”

For more information on Minnie Spotted-Wolf, please check out https://en.wikipedia.org/wiki/Minnie_Spotted-Wolf and the 30 May 2011 Overdrive Magazine article “On Memorial Day: A Trucker to Remember” at https://www.overdriveonline.com/on-memorial-day-a-trucker-to-remember/

Additional information on the dedication of the Minnie Spotted-Wolf Memorial Highway is available at https://www.kxlf.com/news/montana-news/minnie-spotted-wolf-memorial-highway-dedicated.