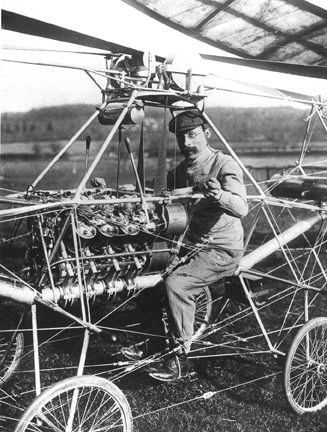 The first flight of a helicopter that was both piloted and untethered took place near the commune of Coquainvilliers in northwestern France. The pilot was engineer and bicycle-maker Paul Cornu in a twin-rotor aircraft that he had constructed. This experimental helicopter was outfitted with a 24-horsepower (18-kilowatt) Antoinette engine and had an open-framework structure built around a curved steel tube with rotors at each end.

Eight weeks earlier, another French helicopter – a Breguet-Richet Gyroplane I — had managed to lift off under its own power and reach a height of two feet (61 centimeters) above the ground. This helicopter, however, was not a free flight since four men on the ground held the aircraft in position with poles to keep it steady.

In pursuing a flight that not only had somebody on board the helicopter but was completely unfettered, Cornu found himself being carried about one foot (30 centimeters) off the ground for 20 seconds. Cornu’s brother Jacques and several others were on hand to witness this pioneering lift-off. While not much of a flight in terms of duration and elevation, it did earn 26-year-old Paul Cornu an honored place in the annals of major aviation achievements.

Unfortunately, Cornu was not able to do too much more with the helicopter since it proved to be tough to maneuver in the air and unable to stay aloft for longer than a minute. He ended up setting the aircraft aside and continued to make a living manufacturing bicycles.

For more information on Paul Cornu and his record-setting 1907 flight, please check out https://en.wikipedia.org/wiki/Paul_Cornu and https://www.normandythenandnow.com/incredible-cornu-the-helicopter-cyclist-from-lisieux/.

Additional information on the helicopter used for the flight is available at https://en.wikipedia.org/wiki/Cornu_helicopter.