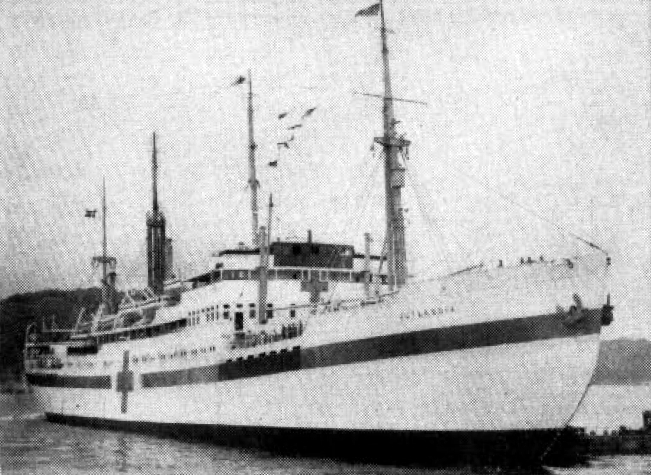 In Denmark, the Jutlandia – an ocean liner that had been recently reequipped as a hospital ship – left Copenhagen under the command of Commodore Kai Hammerich for use as a medical treatment facility in the Korean War. “Despite snow and cold,” reported the New York Times, thousands of people showed up to watch the ship as she sailed away from Denmark’s capital city. The New York Times also noted, “The 85,000-ton [77,111-metric ton] Jutlandia, considered one of the finest vessels in the Danish commercial service, was made available for service in Korea as part of the Government’s contributions to the United Nations Unified Command.” The Jutlandia departed from Copenhagen the day after King Frederick IX of Denmark and his wife Queen Ingrid had visited the ship.

The Jutlandia was contracted by and constructed for the Denmark-based East Asiatic Company in 1934 as a combined passenger-and-cargo ship for a regular route between Copenhagen and Bangkok. The Jutlandia remained in service on this route until 1940, just a few months after World War II broke out in Europe. Germany invaded and occupied Denmark later that same year, but did not seize the Jutlandia due to a shortage of diesel oil. The ship, therefore, spent most of the German occupation unused at the Danish island of Slotø.

After the war in Europe ended in 1945, the Jutlandia went back into commercial service. When the Korean War started in 1950, Denmark agreed to provide a hospital ship as part of its humanitarian support for the United Nations Command fighting the Communist forces. As that hospital ship, the reconverted Jutlandia left Copenhagen with a medical staff of 91 and a crew of 97. From her arrival in South Korea to the end of the military conflict in 1953, approximately 4,900 wounded soldiers received medical treatment onboard the Jutlandia. In addition, the ship’s medical staff treated more than 6,000 civilian Koreans either onboard or at facilities onshore.

The Jutlandia resumed commercial service between Copenhagen and Bangkok in 1954 and continued operating on the route for a decade. In 1966, the ship was retired from service altogether and scrapped.

For more information on the Jutlandia, please check out http://www.koreanwar-educator.org/topics/docs/hosp_ship/jutlandia.htm.