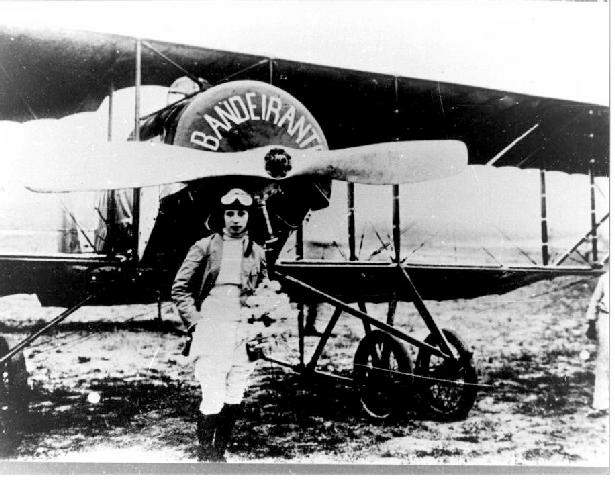 In 1922, Brazilian airplane pilot Anésia Pinheiro Machado was granted Brevet No. 77 from the Fédération Aéronautique Internationale (the international regulatory organization for flying). This certification, which was specifically given to Machado by Aeroclube do Brasil, made her only the second licensed female pilot in Brazil. (The first woman in Brazil to earn such a license was Theresa De Marzo, who obtained her international certification just before Machado received hers.)

Machado had been born in the Brazilian municipality of Itapetininga sometime between 1902 and 1904. By 1919, she had developed a strong interest in flying despite the objections raised by others. “The least they said about me was ‘She’s a screwball,’” Machado recalled in a 1967 interview with the Canada-based Ottawa Citizen. “Flying to me meant freedom, a sort of adventure, an escape.”

Machado achieved several major milestones during her aviation career. Among other things, she was the first female pilot in Brazil to operate a plane on a trip from São Paulo to Rio de Janeiro; transport passengers; and make stunt flights. Machado was also the first Brazilian female pilot to write articles exclusively dealing with aviation issues.

Machado’s fame and accomplishments as a pilot went well beyond the boundaries of her home country. She was especially proud of an airborne goodwill tour that she once undertook throughout much of the Western Hemisphere. A key part of this tour entailed delivering letters from Alberto Leras Camargo, at the time the secretary-general of the Organization of American States and a future president of Colombia, to the heads of state of various countries along the way. Machado later recounted, “The greatest satisfaction I believe I ever had was in 1951 when I delivered greetings to presidents in North Central and South America.”

In the course of her long life, Machado received a wide range of honors for her pioneering role as a pilot. In 1970, for example, Missouri Governor Warren E. Hearnes made her an honorary citizen of the Show-Me State. In 1989, Machado received the Edward Warner Award; this international award is presented to individuals and organizations who have made significant contributions to civil aviation.

In addition, Machado became known as the “Dean of All Women Pilots.” She was an active member of the Ninety-Nines: International Organization of Women Pilots. Machado’s appreciation for the profession and its potential was clearly conveyed when, during her interview with the Ottawa Citizen, she talked about how she saw her fellow pilots as people “for whom there are no barriers or borders but the horizon – we have a sort of duty to make the world better through our understanding of one another.” Machado died in Rio de Janeiro in 1999.