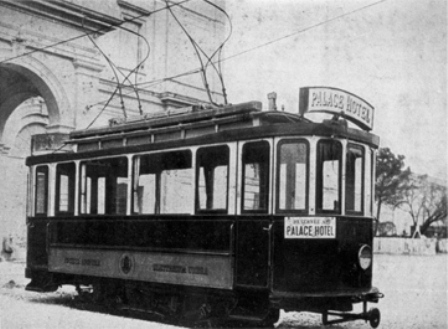 The Napoleone Pimpinelli Company was awarded a contract to build an electric tram (streetcar) line in the city of Perugia in central Italy. The company subsequently carried out that construction project under the supervision of the German electrical engineering company Siemens & Halske AG. The project was part of a larger modernization effort within Perugia that also included building an aqueduct and an electrical supply network for the city.

The tram line was completed about six months after the Napoleone Pimpinelli Company had been contracted to construct it. Those on hand for the official opening of the Perugia Tramway included Antonio Salandra, who was minister of agriculture for Italy at the time and would serve as the country’s prime minister from 1914 to 1916.

The Perugia Tramway was first run by the company Società Anonima Elettricità Umbra (SAEU), which also handled the city’s transition from gas lighting to electrical power. This new means of transportation had more than its fair share of complications and controversy from the time of its debut, however. During the tramway’s first two years of existence, for example, the service provided by those cars was sporadic at best due to frequent disruptions in the city’s equally fledgling reservoir of electricity.

In addition, the streets carrying the Perugia Tramway’s line were so narrow that the trams clattered unnervingly close to shops and homes along that route. Another potential cause for concern involved local children who would recklessly roll bowling balls on the tracks.

Notwithstanding these drawbacks and others, the Perugia Tramway remained in operation for more than four decades. This tramway initially covered 2.6 miles (4.2 kilometers) between the Perugia railway station, which had opened in 1868, and the piazza (square) adjacent to the city’s cathedral. (This piazza had long been called the Pope Piazza because it was the location of a statue of Pope Julius III that was created by Renaissance sculptor and Perugia native Vincenzo Danti; after the statue was moved to make room for the tram line, the piazza became known instead as the Piazza Danti.)

In 1929, Unione Esercizi Elettrici (UNES) replaced SAEU as the Perugia Tramway’s operator. Three years later, the length of the tram line was slightly reduced to 2.4 miles (3.9 kilometers). As a result of this modification, the Piazza Danti was replaced by the nearby Piazza Italia as the route’s northern terminus. Another change involving the Perugia Tramway took place in 1939 when UNES was acquired by Società Meridionale di Elettricità.  Under that new company’s management, the Perugia Tramway was phased out altogether in 1943. Its successor was a trolleybus service that remained in operation until 1975.

For more information on the Perugia Tramway, please check out https://en.wikipedia.org/wiki/Trams_in_Perugia