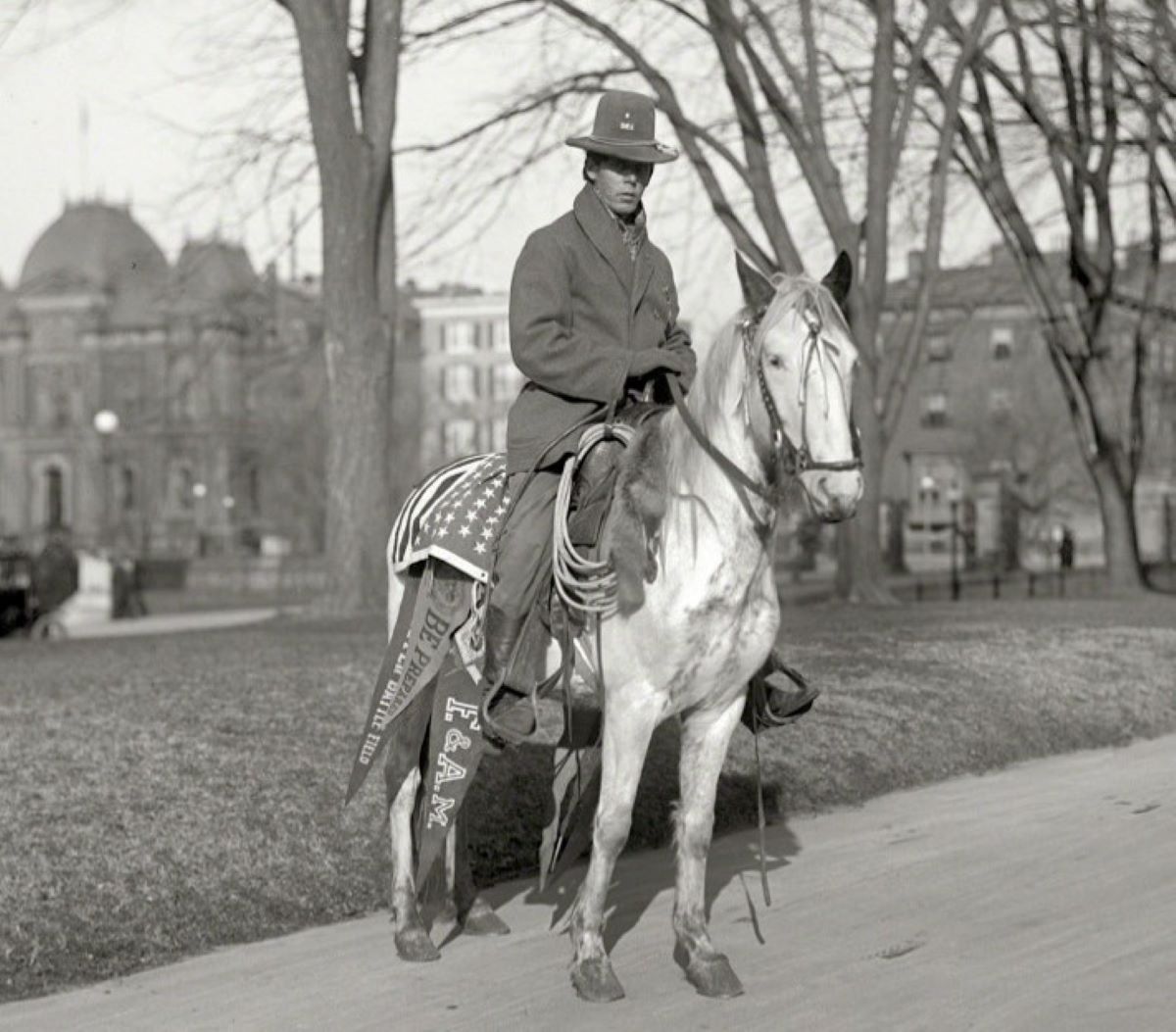 In March 1914, Red Fox James began a journey of approximately 3,000 miles (4,828 kilometers) on horseback from the Crow Indian Reservation in southern Montana to Washington, D.C. He made this ambitious nine-month trip on a horse named Montana. “The ride was made for the purpose of creating interest in a proposal to establish a national holiday in commemoration of the North American Indian,” reported the Billings Weekly Gazette shortly after Red Fox James completed the journey.

Red Fox James, who is widely believed to have been of both Blood (Kainai) and Blackfoot ancestry, was born sometime around 1890 in the Blood Indian Reserve No. 148 in what is now the Canadian province of Alberta. By 1914, he was living in the town of Waldheim, Montana.

During his long-distance 1914 journey, Red Fox James traveled mostly on the Lincoln Highway. He often walked in the daytime to help conserve the strength of his horse. Red Fox James’ journey attracted press coverage nationwide. The Greensboro Daily News in North Carolina, for example, featured a front-page photo of Red Fox James and his horse during their stopover in Omaha, Nebraska, in August. This photo depicted both of them alongside an automobile carrying the city’s mayor James Dahlman.

As he slowly but steadily made his way eastward, Red Fox James spoke in many communities en route about the needs and cultures of Native Americans. He also performed equestrian stunts at those stops. Red Fox James carried with him a letter of support from Governor Sam V. Stewart of Montana for an American Indian Day and he ultimately obtained similar endorsements from 23 other state governments during his ride to the nation’s capital.

Red Fox James finally arrived in the Washington, D.C., area in December. He visited the White House, where Senator Thomas J. Walsh of Montana introduced him to President Woodrow Wilson. Red Fox James gave Wilson all of the documents promoting the call for American Indian Day. (This meeting, incidentally, took place just a few days after representatives from the newly formed American Association of State Highway Officials had met with Wilson there at the White House.)

While such a national holiday commemorating Native Americans was not established at the time, a few states subsequently created their own versions of that day. The first of these states was New York, which began officially celebrating American Indian Day in 1916.

Red Fox James is best known today for his 1914 horseback trek between the Great Plains and the Eastern Seaboard, but he also made other noteworthy contributions during his life. These contributions included serving as a member of the Society of American Indians, the first national rights organizations run by and for Native Americans; establishing the first Boy Scout troop for Native Americans; and championing the right of women to vote.