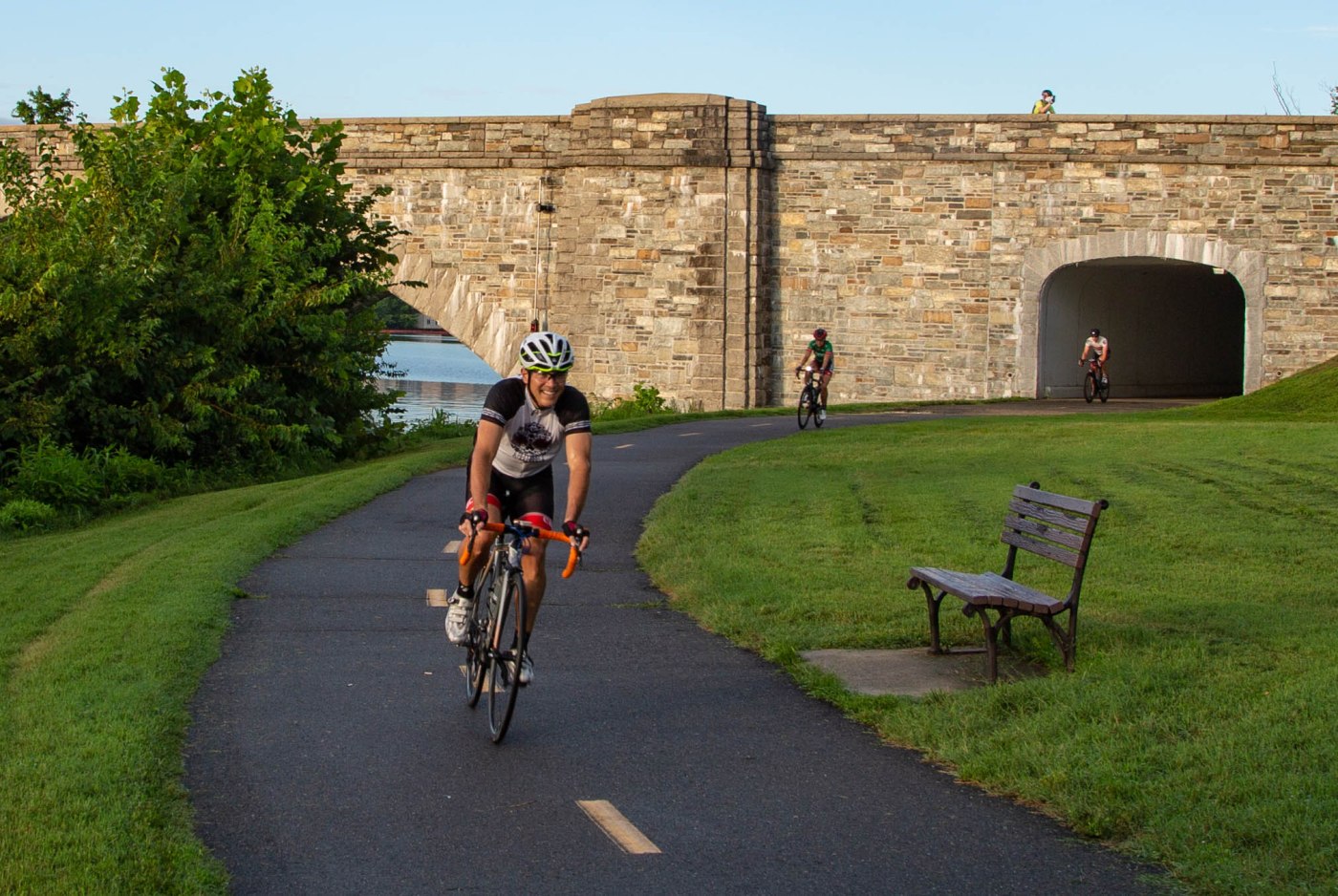 A new section of a shared use path in Northern Virginia was officially opened. This segment, covering 7.5 miles (12.1 kilometers) between the independent city of Alexandria and George Washington’s historic home of Mount Vernon, was built as part of a trail operated and maintained by the National Park Service (NPS).

The first section of this trail had been opened just a little over a year earlier. That section (spanning about six miles [9.7 kilometers]) was constructed between the George Mason Memorial Bridge, which is one of the Potomac River bridges connecting Arlington with Washington, D.C.; and Slaters Lane in Alexandria. Originally known as the Alexandra Bike Trail, it was renamed the Mount Vernon Trail (MVT) at around the time that landmark became the route’s new southern endpoint.

The 1973 dedication ceremony for the second section of MVT took place at Belle Haven Park, which is located in the part of Virginia’s Fairfax County that is just south of Alexandria. The public officials on hand for this ceremony included Herbert E. Harris, that area’s member of the Fairfax County Board of Supervisors (FCBOS). “The will of the future is upon us,” he proclaimed to those in attendance. “The bicycle’s day has come.”

Harris’s role at the event also involved helping to cut the ribbon that had been stretched across the trail. The other public officials likewise taking part in the ribbon-cutting duties were Russell Dickenson, director of the National Capital Parks (an administrative unit of NPS in the region); Douglas Wheeler, assistant deputy secretary of the U.S. Department of the Interior; Major General Robert R. Ploger, commandant of the U.S. Army Engineer School at Fort Belvoir; and Jean Packard, chairperson of the FCBOS. After all of them had jointly snipped apart the ribbon, 60 bicyclists — along with one person operating a pedal-driven car — began riding on the newest portion of the trail.

MVT has since been extended beyond the George Mason Memorial Bridge, with Theodore Roosevelt Island now serving as the route’s northern terminus. One of the most popular trails in the Washington metropolitan area, MVT currently covers about 17 miles (27 kilometers) altogether. It is also a link in the Potomac Heritage National Scenic Trail, a wide-ranging network of trails throughout much of the mid-Atlantic region.

For more information on the Mount Vernon Trail, please check out https://en.wikipedia.org/wiki/Mount_Vernon_Trail

Additional information on the Potomac Heritage National Scenic Trail is available at https://en.wikipedia.org/wiki/Potomac_Heritage_Trail