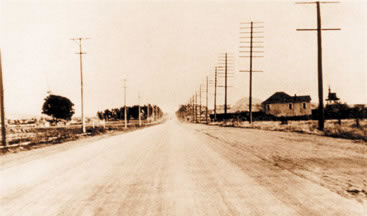 A milestone in the development of American highways took place when the U.S. Bureau of Public Roads issued a certificate of completion for the first project finished under the Federal Aid Road Act of 1916. The project was based in Contra Costa County, California, and it involved a 2.55-mile (4.10-kilometer) stretch of road between the cities of Albany (adjacent to the border of Alameda County) and Richmond.

Officially classified “California Federal-Aid Road Project No. 3,” it was known locally as the “Alameda County boundary to Richmond road” project. Work on the project had begun on September 1, 1916, less than two months after President Woodrow Wilson signed the authorizing federal measure into law during a White House ceremony. The Federal Aid Road Act of 1916 apportioned funds for highways based on area, population, and post road mileage.

The work for the pioneering project in Contra Costa County involved grading the roadbed; draining and then installing culverts flanked with concrete headwalls; laying a Portland cement concrete base that was 20 feet wide, and; providing a bituminous concrete top. The total cost of the project was $53,938.85, with the federal government contributing funds in the amount of $24,244.56.

The certificate of completion for this project marked a defining moment for the landmark 1916 Law, which paved the way for the sustained federal-state partnership in roadbuilding efforts nationwide over the past 100 years. George P. Coleman, whose career included serving as Virginia state highway commission chairman and president of the American Association of State Highway Officials (AASHO), underscored the significance of the Federal Aid Road Act of 1916 and resulting federal-state partnership while speaking at an AASHO event in 1939. “The importance of the passage of this bill on the highway movement of the nation cannot be overestimated,” he said.