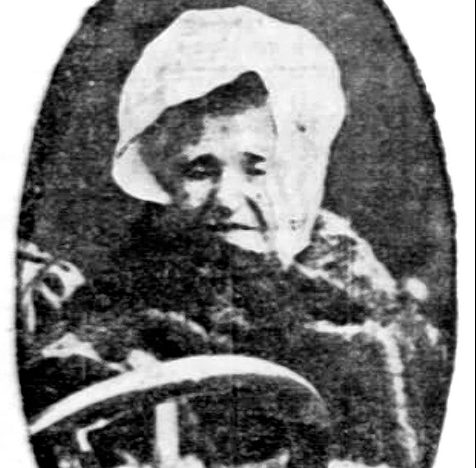 On her 100th birthday, Hepsa Cottle lived it up by traveling in an automobile in her adopted hometown of New York City. “Aged Woman Enjoys Novel Celebration,” proclaimed a headline in the San Francisco Call. In its own account of Mrs. Cottle’s birthday ride, Automotive Industries magazine characterized her in a caption as “the Oldest Automobilist.” This festive excursion wasn’t the first automobile ride for Cottle, who had the distinction of being one of the earliest-born people – if not the earliest-born person – to go out for a spin in the “horseless carriage.”

Cottle was born Hepsa Daggett on the Massachusetts island of Martha’s Vineyard just a little over a week after James Madison became the fourth president of the United States. George Washington, the first president, had died less than a decade earlier.  The New York Times noted in an April 1909 article, “At her birth fires were lighted by the tinderbox, and the steamboat had not been perfected.”

Hepsa’s first husband, whose last name was Andrews, died on Wallis Island in the South Pacific. In 1850, she married a housewright and carpenter named Franklin D. Cottle. He soon left Martha’s Vineyard to seek his fortune in California. She followed him there in 1852, sailing for the most part but traveling by foot across the Isthmus of Panama. The Cottles ended up settling in San Francisco, and this city would remain her home for more than a half-century.

In April 1906, the now-widowed Hepsa Cottle – living at the time with her daughter Mrs. J.J. Evans and her family in San Francisco’s Nob Hill neighborhood — managed to survive the still-infamous earthquake that slammed San Francisco. With their home destroyed as a result of the earthquake, Cottle left San Francisco with her daughter, son-in-law, and grandson to start a new life in New York City.

It was in New York City that Cottle was introduced to the notion of riding around in automobiles. The Altoona Times and various other newspapers reported that she took “a great fancy to automobiling – not to conservative automobiling but good, fast driving.” After going out for a short ride in New York City, Cottle set out in November 1906 as a front-seat passenger on a much extensive automobile journey of 245 miles to Boston. The trip proved to be tiring but also thrilling for the 97-year-old Cottle. “It was great!” she said after arriving in Boston. “Simply great!”

Cottle’s adventurous spirit and then-novel status as a senior automobilist attracted nationwide attention. The Chicago Tribune featured her in an April 1907 article entitled “Women Laugh at Father Time.” This article asserted that “a few years ago a woman of her age would have been gently restrained from taking even a quiet drive.”

Cottle’s late-in-life love affair with automobiles remained strong on the day that she turned 100. She was not only a passenger but the honored guest for what the San Francisco Call reported was “a fast automobile ride,” with racecar champion Harry Kobe behind the wheel as her chauffeur.

Cottle died in June of the following year, leaving a unique legacy as an automotive pioneer. However, her adventurous spirit when it came to automobiles did not readily extend to other new types of transportation. When her grandson suggested after one automobile trip that she would someday be riding on an airship, she quickly begged to differ. “No,” she replied, “no airships.”

For more information on Hepsa Cottle, please check out the 30 January 2018 Martha’s Vineyard Times article “This was then: Mrs. Cottle’s fast ride” at http://www.mvtimes.com/2018/01/30/mrs-cottles-fast-ride/.