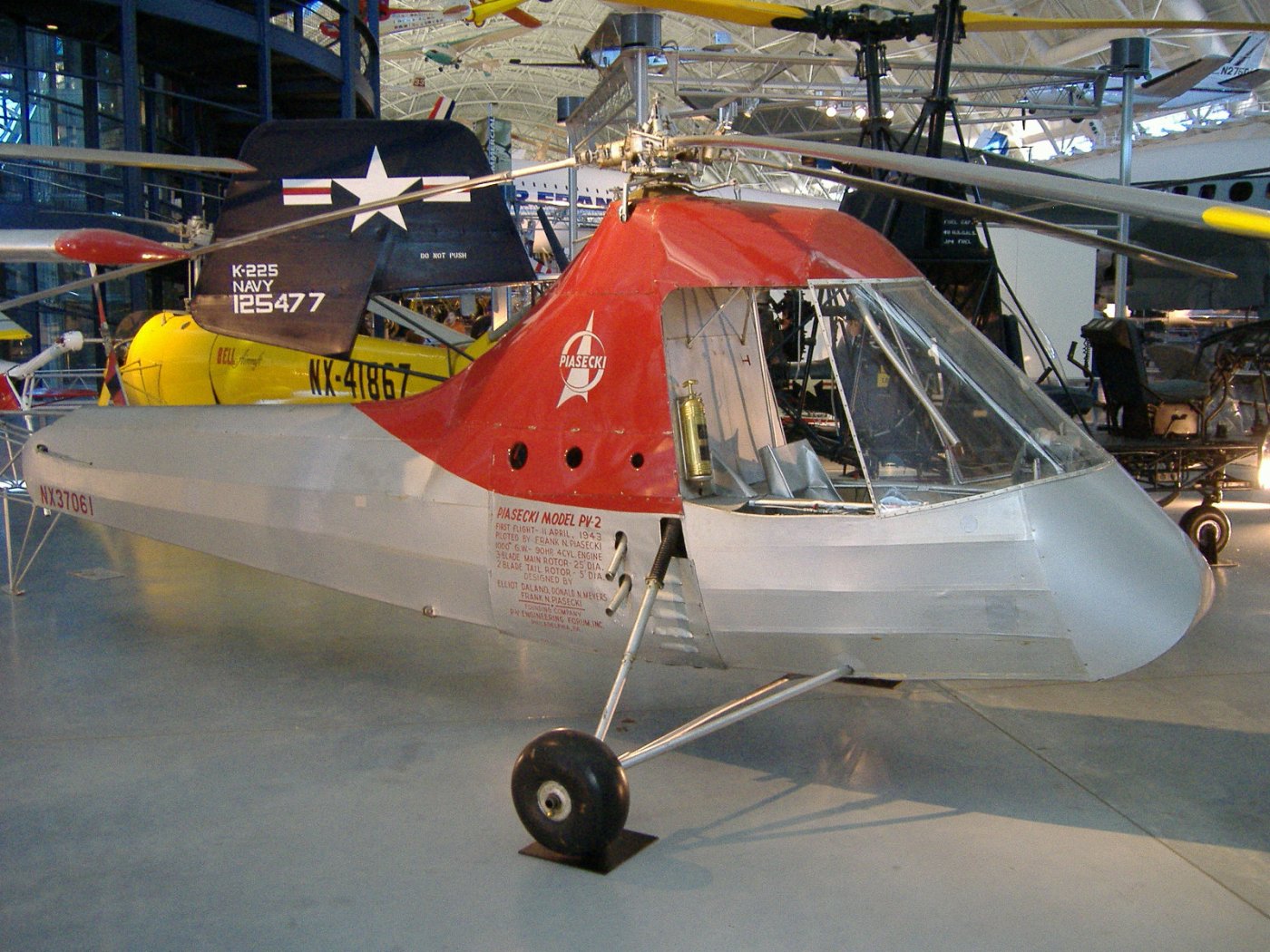 Frank N. Piasecki, an engineer, made the second successful U.S. helicopter flight. In 1940, he helped form the P-V Engineering Forum to build and improve upon Igor Sikorsky’s pioneering helicopter flight over American soil the previous year. Piasecki’s company, however, was strapped for cash. He and his engineering team ended up becoming expert scroungers, searching in venues such as junkyards for discarded automobile and airplane parts to use for their planned helicopter.

Piasecki also saved money through the recruitment of engineering students to help prepare blueprints for the helicopter free of charge. These efforts resulted in a single-person, single-rotor helicopter called the P-V model, which was painted silver with maroon trim and lettering (the official colors of the University of Pennsylvania, where Piasecki and members of his team had studied).

The original test flight of this helicopter happened in error over a field just outside Philadelphia on April 11, 1943. Piasecki was seated in the running helicopter, which was tethered to the ground by a clothesline, to double-check some devices. The clothesline broke, however, and Piasecki – with only 14 hours of airplane piloting experience under his belt – found himself airborne. Fortunately, he was able to navigate the PV-2 and land it safely.

The helicopter’s maiden flight proved to be not only safe and successful but smooth in several important and unprecedented ways. Thanks to its three dynamically balanced rotor blades, for example, the PV-2 vibrated less and proved easier than Sikorsky’s models to control when flying.

The debut of the PV-2 reaped several long-term and even historic dividends for Piasecki and his enterprise. For one thing, he earned the first helicopter pilot’s license ever awarded by the Civil Aeronautics Authority. On a larger scale, the U.S. government became receptive to the idea of using helicopters to help defeat the Axis powers during World War II at that time. Consequently, Piasecki launched a career supplying the PV-2 and other helicopters for military use. This was an ironic development in light of Piasecki’s early expectations that helicopters would become airborne automobiles for more general use.

Piasecki eventually donated the original PV-2 to the Smithsonian Institution. He spent the next several decades continuing to seek ways to advance helicopter design and development. Piasecki died in 2008 at the age of 88.

For more information on Frank N. Piasecki, please check out  http://www.piasecki.com/frank.php and his 15 February 2008 New York Times obituary at https://www.nytimes.com/2008/02/15/business/15piasecki.html.

Additional information on Piasecki’s PV-2 helicopter is available at https://en.wikipedia.org/wiki/Piasecki_PV-2.