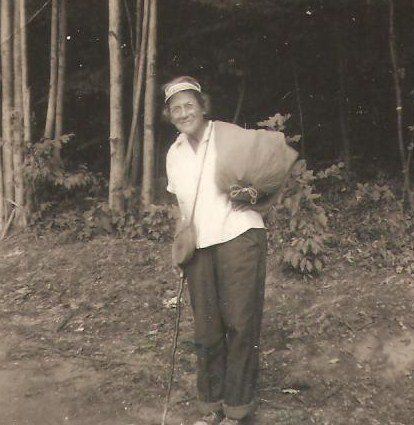 Emma Rowena Gatewood became the first woman to hike the entire Appalachian Trail on her own. The 67-year-old Gatewood was also the oldest person up to that time to complete the trek. Gatewood reached the summit of Maine’s Mount Katahdin, which is the northern terminus of the trail, 146 days after starting her hike at what was then the southern end of the trail at Mount Oglethorpe in Georgia. (In 1958, the trail’s southern terminus was moved 14 miles [22.5 kilometers] northeast to Springer Mountain in Georgia.) Gatewood arrived at Mount Katahdin two days ahead of schedule. While standing atop the mountain, she sang “America the Beautiful.”

Gatewood was a resident of the village of Gallipolis, Ohio, and the mother of 11 and grandmother of 23. She was also no stranger to adversity, having worked as an impoverished subsistence farmer and endured three decades of domestic abuse from the man who had been her husband. Gatewood did not have any hiking experience, but she wanted to walk along the 2,050-mile (3,299.2-kilometer)-long Appalachian Trail because she thought it would be fun.

Gatewood first attempted to hike the trail in 1954, but that effort came to an end after she broke her glasses and got lost. Her second attempt proved to be far more successful. “Ohio’s hiking grandma,” as she was nicknamed in at least one press account, encountered plenty of challenges along the way. She fell and injured herself several times; wore out seven pairs of sneakers; and had to contend with snakes and bears.

Ultimately, however, Gatewood’s achievement garnered her widespread media coverage from such sources as Sports Illustrated magazine and “The Today Show.” Gatewood, who died in 1973 at age of 85, hiked the Appalachian Trail two more times – again in its entirety in 1960 and in sections in 1963. For more information on Emma Rowena Gatewood (also known as “Grandma” Gatewood) and her record-setting 1955 hike, please check out http://appalachiantrailhistory.org/exhibits/show/hikers/gatewood and the 27 June 2018 New York Times article “Overlooked No More: Emma Gatewood, First Woman to Conquer the Appalachian Trail Alone” at https://www.nytimes.com/2018/06/27/obituaries/grandma-gatewood-appalachian-trail.html.