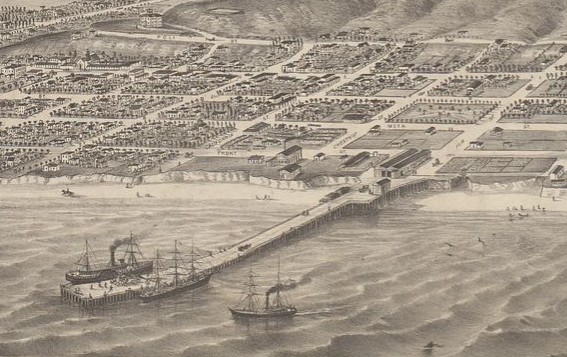 In southern California, construction on a major wooden pier along the Pacific coast was completed in the city of Ventura. “At last a steamer can lay alongside of the wharf, and discharge and take on cargo and passengers,” reported the Ventura Signal newspaper. “It is a grand improvement upon the old way, and duly appreciated by shippers and travelers.”

The plans for the construction of the Ventura Wharf had taken shape during the spring of 1871. The leading forces for the development of the pier were local residents Joseph Wolfson and Juan Camarillo. The first piling for the Ventura Wharf was driven into the ground in May 1872. A ceremony was held in which Camarillo’s daughter Francesca, who would marry Wolfson the following year, broke a bottle of champagne over that first piling.

When the Ventura Wharf was completed five months later, Robert Sudden stepped in as its manager. He would serve in this role for more than two decades. Over the course of several decades, the Ventura Wharf established itself as a pivotal transportation hub for the area. Among other things, the pier facilitated the arrival and departure of ships at Ventura at a time when those vessels were city’s most reliable means of transportation. (It wasn’t until the construction of a railroad in the area in 1887 that there was finally a viable local option for surface transportation.)

The Ventura Wharf made it possible for huge quantities of agricultural products and crude oil from the region to be delivered elsewhere. This could be seen in the Ventura Wharf Company’s annual statement for the year ending April 30, 1898. This statement reported the following exports during the previous 12 months: 80,384 bags of beans; 28,819 bags of corn; 14,721 bags of barley; 6,285 boxes of lemons; 11,855 boxes of oranges; and 518,204 barrels of bulk oil. In addition, the Ventura Wharf also allowed steady shipments of lumber and other goods to the area.

The Ventura Wharf remained a significant commercial transportation center for many years despite the multiple shipwrecks, storms, and fires it experienced. Between 1938 and 1995, the Ventura Wharf — measuring 1,958 feet (597 meters) during that time – was the largest wooden pier on the entire California coast; the Ventura Wharf, now known as the Ventura Pier, is currently 1,600 feet (490 meters) in length. While no longer serving as a commercial wharf, the pier is extensively used today both for fishing and as a pedestrian walkway. It has also become a popular filming spot, with appearances in such productions as the 1990s TV series “Melrose Place” and the 2006 movie “Little Miss Sunshine.”

For more information on the Ventura Wharf (the present-day Ventura Pier), please check out https://www.cityofventura.ca.gov/DocumentCenter/View/3110/Ventura-Pier-Interpretive-Panels-PDF?bidId