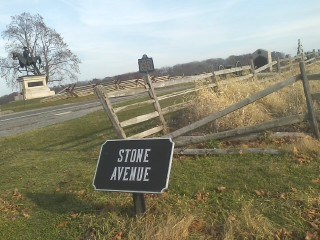 At Gettysburg National Military Park in Pennsylvania, then-Federal Highway Administrator (and later U.S. Transportation Secretary) Rodney Slater played the key role in a ceremony honoring somebody who had distinguished himself both as a war hero and important good-roads advocate.

Roy Stone had served in the Union Army during the Civil War and, on the first day of the Battle of Gettysburg in July 1863, he and his Pennsylvania Bucktail Brigade held off  invading Confederate forces at McPherson’s Ridge. The road in that section of the battlefield had been named Stone Avenue in his memory, but the sign noting this designation disappeared at some point.

During the 1993 ceremony, Slater unveiled a replica of the long-missing street marker. He also took time on what was the 130th anniversary of the Gettysburg Address to acknowledge Stone’s heroism. Slater proclaimed, “General Stone was one of the many brave men President Lincoln spoke of in his Gettysburg Address when he said, ‘The brave men, living and dead, who struggled here, have consecrated it, far above our poor power to add or detract.’”

The dedication ceremony was held as part of a broader effort to commemorate the centennial of when the U.S Office of Road Inquiry – the original predecessor of the Federal Highway Administration – had been established with Stone as its director.

Photographs of the 1993 ceremony at Gettysburg National Military Park are available, along with images of General Roy Stone, at https://www.fhwa.dot.gov/infrastructure/stonegal.cfm.