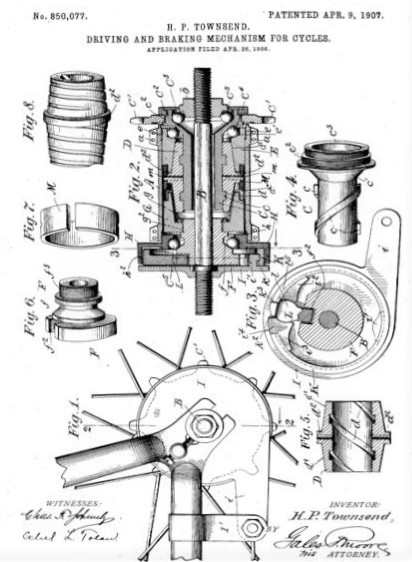 Civil engineer Harry Pond Townsend was granted U.S. Patent No. 850,077 for a coaster brake that he had created for bicycles. Townsend assigned the patent application to his employer, the New Departure Manufacturing Company of Bristol, Connecticut. (The company built its reputation on producing various types of bells, including bicycle bells, and those widely renowned products gave Bristol the nickname “Bell City.”)

Townsend’s invention combined the braking, driving, and coasting functions for a bicycle. The coaster brake, which replaced the front tire hand brake that had been extensively used before, enabled bicycle riders to glide along without pedaling and to quickly come to a complete stop by simply pushing backwards on the pedals. While other individuals submitted and obtained patents for similar devices, Townsend was given broad and controlling claims for this type of mechanism.

The coaster brake, above all else, further improved the safety of bicycles. In becoming standard equipment for bicycles in the United States, the device ushered in a new era in design for that mode of transportation. The coaster brake also helped bolster widespread interest in bicycles at a time when their popularity — after reaching unprecedented levels throughout the 1890s — had started to decline.

For more information on Harry Pond Townsend’s patent for a coaster brake for bicycles, please check out https://connecticuthistory.org/the-coaster-brake-today-in-history/ and https://patents.google.com/patent/US850077A/en.