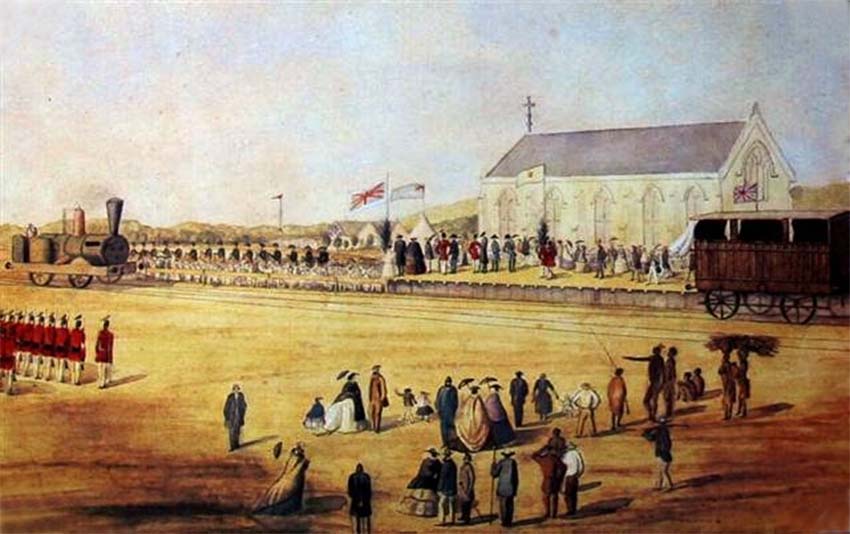 The first public railway in present-day South Africa made its official debut. The Natal Railway formally began operations at 11:00 a.m. in the seaport town (now city) of Durban amid a great deal of fanfare and with the inaugural run of the steam locomotive Natal. (Durban was part of the British colony of Natal, which had been established in 1843 and remained in existence until being combined with three other colonies in 1910 to form the Union of South Africa; the one-time colony of Natal is now part of the KwaZulu-Natal province of the Republic of South Africa.) The Natal Railway’s original rolling stock also included six wagons and a passenger coach.

The festivities for the opening of the railway were amply documented by George Russell, a prolific writer and local resident. He recounted the windy conditions in Durban that morning and how “the first train moved off amid the deafening and prolonged cheers of the assembled spectators.” Russell also highlighted how many of those spectators subsequently found themselves “listening to the occasional merry tunes of the band and the usual congratulatory and complimentary toasts which were offered following inaudible speeches amongst the rattling of the [railway station], the flapping of tarpaulins, the noise of the wind and waves and the arrival and departure of trains.”

The pioneering Natal Railway remained in service until 1877, when it became part of the Natal Government Railways. A restored version of the steam locomotive Natal can be seen today in Durban’s central railway station.

Additional information on the steam locomotive Natal is available at https://en.wikipedia.org/wiki/Natal_Railway_0-4-0WT_Natal