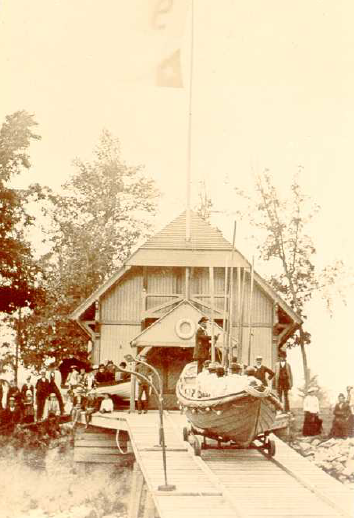 In the Great Lakes region of Ohio, a lifesaving station to rescue shipwrecked mariners and passengers was officially opened in the village of Marblehead at the tip of the Marblehead Peninsula. (This peninsula divides Lake Erie proper from Sandusky Bay.) The genesis of this station and others throughout the nation could be traced to strong concerns about the many lives lost in American waters due to shipwrecks. These concerns led to widespread demands for an organized lifesaving system of paid professionals to replace scattershot all-volunteer efforts.

Congress approved funding for a specialized lifesaving network and authorized the U.S. Secretary of the Treasury to build lifesaving stations wherever deemed necessary along the nation’s shorelines. Marblehead, which had been the site of numerous shipwrecks over the years, was among the places selected for a station. The Marblehead Lifesaving Station was built near a lighthouse that had been erected in 1821 and is now the oldest continuously operated lighthouse on the American side of the Great Lakes.

A Marblehead resident named Lucien M. Clemons was appointed the station’s first keeper, and his tenure began with the official opening of the facility in 1876. Clemons had demonstrated his courage and lifesaving skills on May 1 of the previous year when he and his brothers Hubbard and A.J. – rowing out into stormy weather on Lake Erie on that day in a 12-foot (3.7-meter) skiff (a flat-bottomed boat) — rescued the two surviving members of the seven-person crew of the shipwrecked 102-foot (31.1-meter) schooner Consuelo. As a result of their heroic efforts in that rescue, the Clemons brothers became the first recipients of life-saving medals first class (the present-day Gold Lifesaving Medals).

Lucien M. Clemons served as keeper at the Marblehead Lifesaving Station for more than two decades. During that time, he and his crew undertook 70 major rescue missions and saved at least 89 lives.

The nationwide lifesaving system that Clemons and his crew worked for was further consolidated and organized as the U.S. Life-Saving Service in 1878. The Life-Saving Service remained in operation as a stand-alone agency of the Department of Treasury until becoming part of the U.S. Coast Guard (USCG) in 1915. A USCG station can now be found in the vicinity of the original station in Marblehead.

Additional information on the U.S. Life-Saving Service is available at http://n.b5z.net/i/u/10059514/f/articles/AHistoryoftheUSLSS-DenisNoble.pdf.