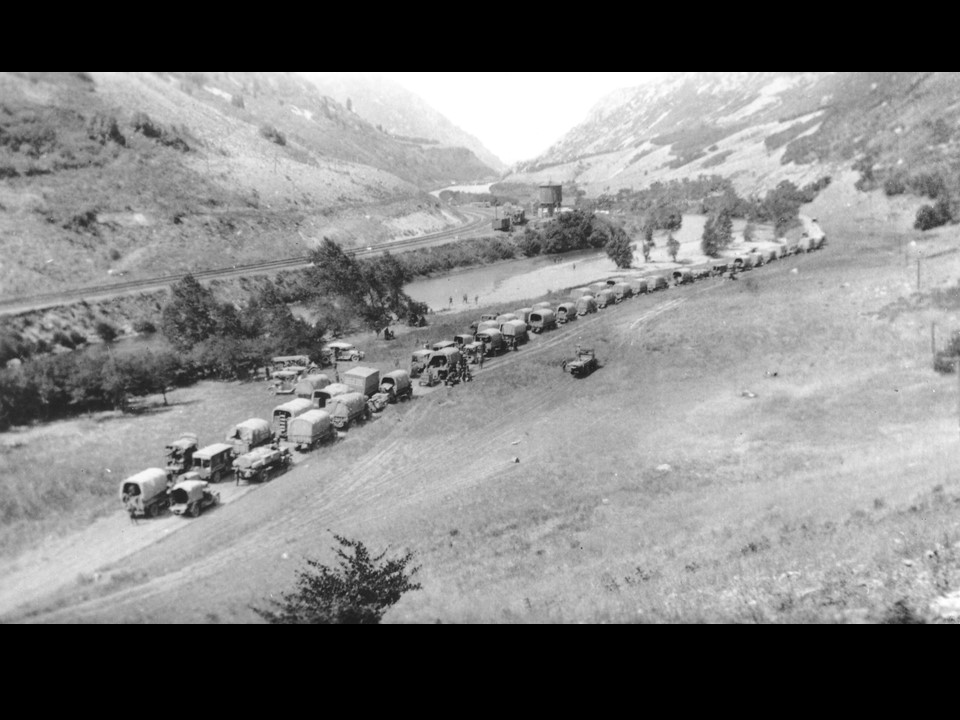 The U.S. Army’s Cross-Country Motor Transport Train arrived in San Francisco, completing a transcontinental trip of 3,251 miles (5,232 kilometers) that began on July 7 in Washington, D.C. On the evening of September 6, convoy commander Lieutenant Charles W. McClure formally confirmed the end of this historic journey in a telegram that he sent to the U.S. Department of War in the nation’s capital. The telegram stated:

During the afternoon of the previous day, the convoy had arrived in Oakland. The soldiers spent the night there, and the activities celebrating their visit included dinner in the ballroom at the Hotel Oakland, a fireworks display, and a dance. By 8:30 a.m. on September 6, the convoy was being transported via two ferries out of Oakland Harbor and towards San Francisco.

After reaching San Francisco and then taking an hour to get themselves and their vehicles lined up in formation, the convoy’s participants paraded through the city. They were welcomed by bands and cheering crowds, and accompanied most of the way by both civilian and military motor escorts. “Fair and warm,” noted First Lieutenant Elwell R. Jackson in his daily log. “Paved city streets.”

At 34th Avenue, the convoy entered Lincoln Park for the final part of the trip. Since this park was the western terminus of the Lincoln Highway, the ceremonies for the arrival of the convoy at that location included dedicating a mile-marker monument similar to the Zero Milestone near the White House. A pair of army planes flying above that section of Lincoln Park showered down flowers as part of the dedication.

San Francisco Mayor (and future California governor) James Rolph Jr. was among those at the park to greet the convoy’s participants and praise them for what they had achieved. “Another bright page in our country’s history,” he said, “another joy for the people of the State of California.” The soldiers were honored as well with special medals that had been cast by the Lincoln Highway Association. The men also spent their time in Lincoln Park enjoying hot dogs, cookies, pies, and coffee served by the Red Cross. It was after this lunch that the convoy officially disbanded.

The following day’s edition of the San Francisco Examiner sought to put into words what the Cross-Country Motor Transport Train truly had to endure in its trek from one coast to another. The newspaper asserted, “The arrival of the motor caravan marks the end of a trail as long as the continent is wide, and is the close of a grueling test of human stamina and endurance.” The article also emphasized that the trip took place “under all sorts of conditions, in all kinds of weather, and over all kinds of roads.”

In a piece that appeared the following year in Mechanical Engineering magazine, Jackson went beyond his mostly brief log entries to outline the experiences of the transcontinental expedition in which he had taken part. He wrote, “The interest of the general public in the Convoy was evidenced by a whole-hearted hospitality which never failed from beginning to end of the trip, and which was quite as spontaneous in the small towns as in the larger cities.”

Jackson also highlighted other major takeaways from the journey. He noted, “All along the route great interest in the Good Roads Movement was aroused by the passage of the Convoy, and it was reported that several states had voted favorably on large uses of road bonds.”

One participant in the convoy who not only became convinced of the nationwide need for improved roads but ultimately acted on that belief in a significant and far-reaching manner was Lieutenant Colonel Dwight D. Eisenhower, who as the 34th president signed into law the measure formally establishing the Interstate Highway System. The 1919 transcontinental trip was not Eisenhower’s sole influence on this matter, but it unquestionably played an important role. “The old convoy had started me thinking about good, two-lane highways,” he wrote many years later.

For more information on the U.S. Army’s 1919 transcontinental motor convoy and its legacy, please check out https://www.dwightdeisenhower.com/368/1919-Transcontinental-Motor-Convoy and https://www.worldwar1centennial.org/index.php/communicate/press-media/wwi-centennial-news/6402-podcast-ike-s-big-road-trip.html.

A silent film about the convoy is available at https://www.youtube.com/watch?v=hZJKxkfF1D8.