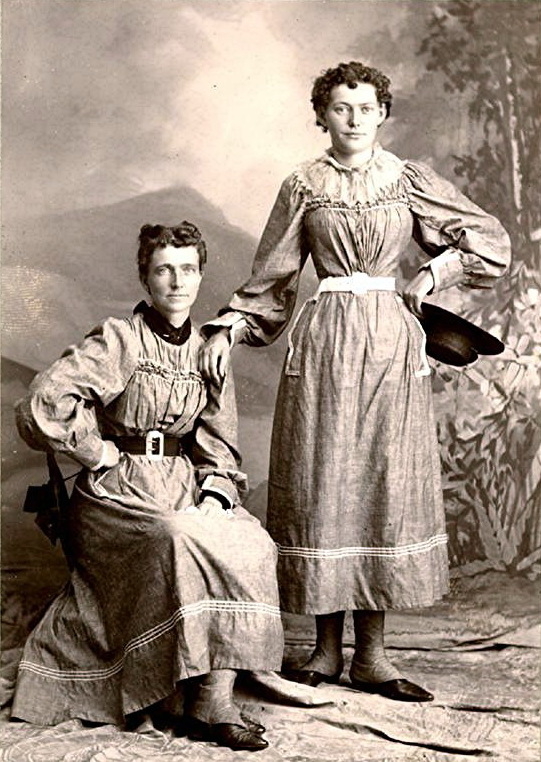 In 1896, Helga Estby and her 17-year-old daughter Clara made national headlines when they walked across the United States from Spokane, Washington, to New York City. Helga had been born in 1860 in the city of Christiana (present-day Oslo) in what is now Norway (at the time part of the United Kingdoms of Sweden and Norway). When Helga was only 11, she and her widowed mother immigrated to the United States and settled in Michigan.

In 1876, Helga married a logger, carpenter, and fellow Norwegian immigrant named Ole Estby. They and their children lived in Minnesota before relocating to the community of Mica Creek in the Spokane area. The family suffered major financial setbacks due in large part to an economic depression that began in 1893 and lasted for a few years thereafter. Along with being impacted by this depression (best known today as the Panic of 1893), the family’s prospects were further clouded when injuries suffered by Ole temporarily kept him from working.

With these collective hardships weighing them down, the Estbys were unable to pay the mortgage and taxes on their home and farmland. It was then that Helga decided to try to save their farm by walking from their part of the United States to New York City to win a $10,000 prize that was being offered as an official and widely publicized wager. This prize would be awarded by a sponsoring party (the names of any and all individuals comprising this party have been lost to history) to the woman who could first complete a coast-to-coast walk across the country within a specific timeframe.

Helga took up this wager, and a contract was prepared by the sponsoring party for her and Clara to initiate their long-distance hike. Leaving her husband and their other five children at home, 36-year-old Helga began her transcontinental trek with Clara on the morning of May 6, 1896. The day before, Helga and Clara visited the Spokesman-Review newspaper office to publicly announce their planned trip. Mayor H.N. Belt of Spokane gave the women a letter of introduction that they could carry with them.

Over the next seven-and-a-half months, these women averaged 30 miles (48.3 kilometers) per day while making their way to the east coast by foot. Between the two of them, they wore out 32 pairs of shoes. These determined women generally walked along rail lines throughout much of the journey. In addition, Helga took the time to stop at newspaper offices en route to provide status updates on the walk.

The other items that Helga and Clara brought with them for the walk included a map, compass, revolver, knife, notebook, pen, and a total of five dollars in cash. The women also had a pepperbox pistol, a kind of muzzle-loading revolver that shoots lead bullets, to help ward off potential attackers. In addition, Helga and Clara carried calling cards that stated: “H. Estby and daughter. Pedestrians, Spokane to New York.”

Helga and Clara, rather than begging for assistance with everyday needs during their trek, worked for everything from food to lodging. As a result of their industriousness and the hospitality of others along the way, the Estby women ended up spending only nine nights without any shelter. Helga and Clara also encountered and survived other challenges such as steep terrain; snowstorms; flash floods; high temperatures; and wild animals.

Their travels took them through major cities such as Boise, Salt Lake City, Lincoln, Des Moines, Chicago, Pittsburgh, and Harrisburg. The numerous individuals with whom they met en route included several governors and mayors. The women also visited with Republican presidential candidate William McKinley, who was elected the 25th president that year, and the wife of his Democratic opponent William Jennings Bryan.

The Estby women experienced a delay in their steady trek towards New York City when, while walking through Pennsylvania, Clara sprained her ankle. Helga wrote to the sponsoring party requesting an extension of their arrival deadline in light of that injury.

Helga and Clara’s 4,600-mile (7,403-kilometer) journey ended on December 23, 1896, when they reached New York City, but the sponsor(s) — asserting that the women missed the original agreed-upon arrival deadline by a few days and evidently having rejected the request for an extension — refused to give them the $10,000 prize or even provide financial assistance for them to return home. Helga and Clara eventually did make it back to Mica Creek (most likely by rail the entire way), but it was anything but a joyful homecoming. During the time that both women were away from home, Helga and Ole’s children Bertha and Johnny had died of diphtheria. Helga also found herself shunned by many individuals in the local Norwegian-American community who viewed her undertaking that transcontinental walk as deserting most of her family.

The still-broke Estbys ultimately lost their home and property in Mica Creek. The family then moved to Spokane, where Ole built a two-story home and launched what turned out to be a profitable construction business. Helga, who also became known as a staunch suffragist, died in 1942. In the decades since then, the 1896 walk that she and Clara completed has received overdue acknowledgment and renewed interest as a remarkable achievement.

For more information on the transcontinental walk of Helga and Clara Estby, please check out  https://www.historylink.org/File/9926.