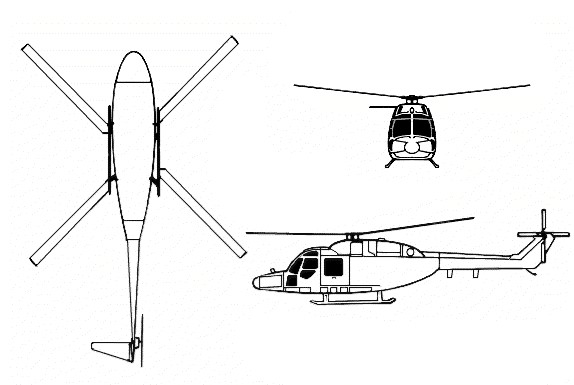 Test pilot Trevor Egginton established a new speed record for conventional helicopters. He did so by reaching a speed of 249.1 miles (400.9 kilometers) per hour in a helicopter that he flew in the skies above southwestern England. Egginton was accompanied by flight test engineer Derek J. Clews.

The helicopter used for this record-setting effort was a Westland Lynx AH.1 (The above image features a three-view drawing of this helicopter model.) This multi-purpose military aircraft was built by the British company Westland Helicopters, and the version piloted by Egginton had been fitted with state-of-the-art composite rotor blades to further improve aerodynamic performance.

The Fédération Aéronautique Internationale (FAI) formally certified that Egginton’s flight set a new helicopter speed record, breaking the one that had been achieved in 1978 when a modified version of the Soviet military helicopter Mil Mi-24B flew at a speed of 228.9 miles (368.4 kilometers) per hour in the vicinity of Moscow. Egginton, who died in 2015, continues to hold the official FAI record for the fastest flight of a conventional helicopter.