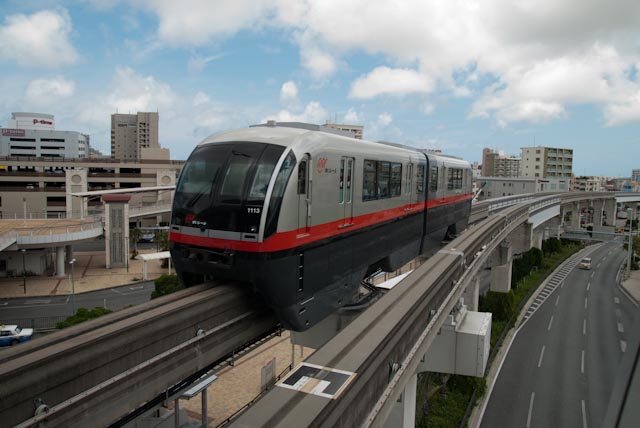 In Japan, a monorail line serving the city of Naha on Okinawa Island made its official debut. While Okinawa previously had railroad, trolley, and horse-drawn streetcar services, the Okinawa Urban Monorail (also known as Yui Rail) became the first rail line to operate on the island since World War II. The monorail line is also currently the only public rail system in the entire Okinawa Prefecture, which is the southernmost of Japan’s first-tier administrative divisions and consists of hundreds of the Ryukyu Islands.

Construction on the Okinawa Urban Monorail began in 1996 to help relieve significant traffic congestion in and around Naha. The line’s Yui Rail brand name and logo resulted from a public competition.

In 2019, the eastern portion of the Okinawa Urban Monorail was extended from Naha to the city of Urasoe. Tedako-Uranishi Station in Urasoe became the new eastern terminus for the line, and Okinawa Urban Monorail chief executive Yoshimasa Misato used the opening ceremony for this facility to highlight the overall benefits of the transit service. “Yui Rail is a transportation system that is people-friendly,” said Misato. “We connect people with towns, and people with people.”

At present, the Okinawa Urban Monorail covers 11 miles (17 kilometers) and encompasses 19 stations. Another one of this monorail line’s more unique claims to fame is its use of the traditional Okinawan folksong Tanchamee as the chime for announcing the arrival and departure of trains.

For more information on the Okinawa Urban Monorail, please check out https://en.wikipedia.org/wiki/Okinawa_Urban_Monorail