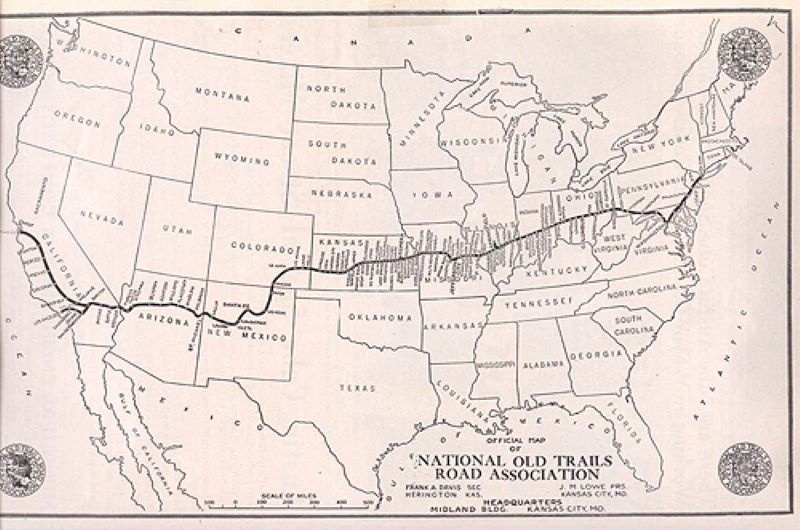 Starting at their home base in the Los Angeles region, the members of the Automobile Club of Southern California formally launched a project that would take them well beyond the Golden State.  The inauguration of that project, while easily overshadowed by other news such as the recent outbreak of World War I in Europe and debut of the Panama Canal, was nonetheless noteworthy and far-reaching in its own right: the installation of signs along the western half of the National Old Trails Road.

That idea for that road had been officially proposed in 1912 as a transcontinental highway stretching from the southwestern U.S. to the Eastern Seaboard along such old routes as the Santa Fe Trail and the National Road.  The Automobile Club of Southern California embraced the National Old Trails Road for the long-distance motor vehicle travel options it would make possible.

The potential and advantages of that route were further highlighted for the club members by two big events related to the Panama Canal that would take place in California in 1915.  To help celebrate the newly opened water passageway, the Panama-Pacific International Exposition was scheduled to be held in San Francisco with the Panama-California Exposition taking place in San Diego.

The Automobile Club of Southern California, along with a number of other good-roads advocates, saw those expositions as a golden opportunity to promote the benefits of the National Old Trails Road in allowing attendees of each event to drive to the west coast from other sections of the nation.  Fred L. Baker, who was a founder of the club and its president since 1910, even promoted that opportunity while visiting New York City in January 1914 to meet with officials of the American Automobile Association

The club, in collaboration with the National Old Trails Road Association, saw the posting of signs along at least part of that route as a key means of enabling motorists to better find their way to those expositions in what one Texas newspaper forecasted would “be the liveliest touring season since the introduction of the self propelled vehicle.”  The first of those signs was set up on that Thursday in August in front of the club’s property on South Figueroa Street in Los Angeles, with the second installed in the nearby city of Pasadena at the southeast corner of Colorado Avenue and Fair Oaks Avenue.

The sign-posting crew, directed by the club’s road department, then made its way steadily eastward along the route.  The final sign in that effort was placed more than a year later on September 3, 1915, in Kansas City, Missouri, after what Sunset: The Pacific Monthly magazine characterized as “great hardships and trials which would have discouraged any club of less experience.”  Testimony on the club’s work in setting up those signs was likewise offered by R.A. Woodall, a Chicago resident and representative of the automobile-route-and-map service Blue Book Publishing Company, who drove west along the road from Raton, New Mexico, during that time.

“When we saw a big, white truck that looked like a circus van with the name of the Automobile Club of Southern California emblazoned on its sides we hailed it with great good cheer, for we figured that now we would receive some authentic information that would enable us to cover the rest of the road into Los Angeles with little difficulty,” he reported.  “When we spoke to the road crew, and, pencil in hand, prepared to take copious notes, we were told that all that was necessary to do was to follow the Club’s signs and we couldn’t lose our way.  That was literally true.  We were not held up a single moment by lack of knowledge of the route.”