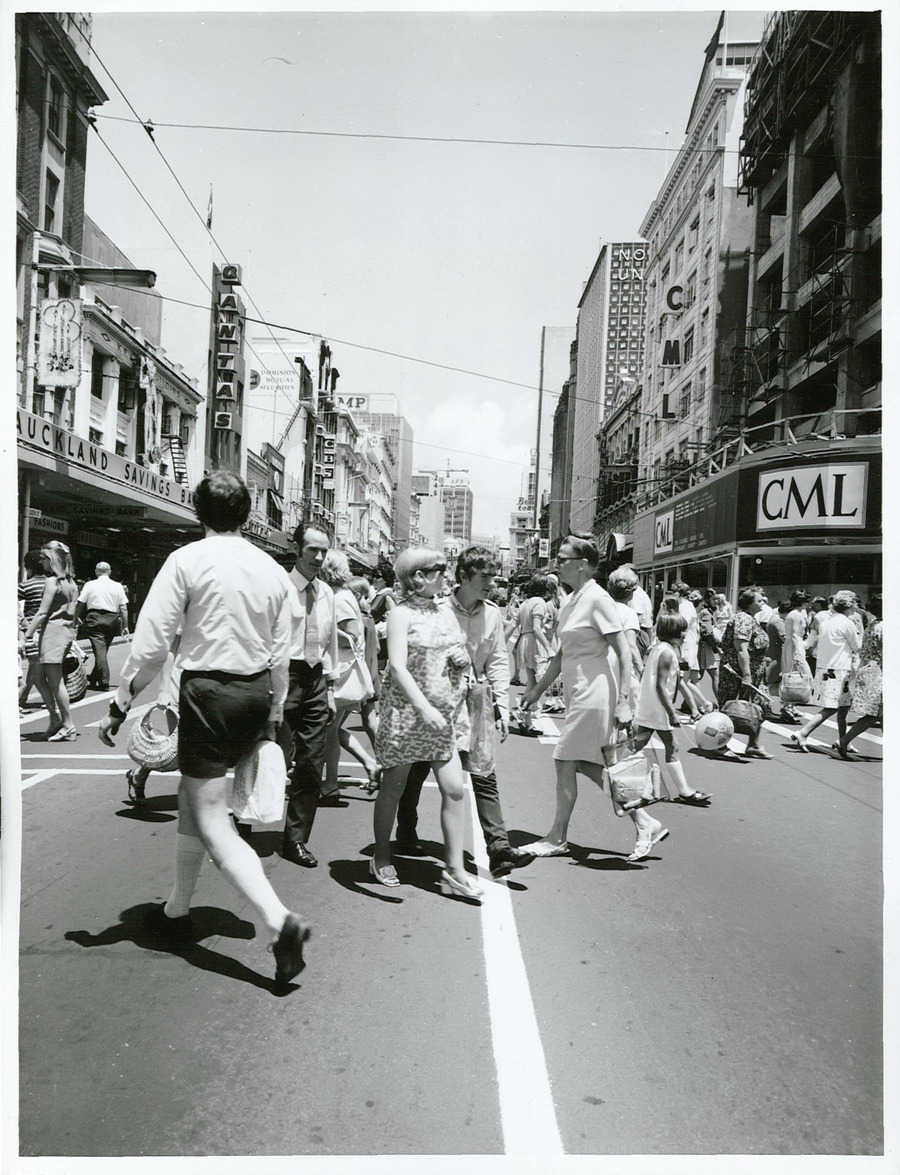 In New Zealand, Auckland became the first city of that Pacific island country to adopt a street-crossing system for pedestrians that had originated several years earlier in North America. The system, which is generally known as the “pedestrian scramble” and has also been called the “Barnes Dance,” entails having all motor vehicle traffic come to a complete stop at an intersection so that pedestrians can cross the street in any direction (including diagonally) at the same time.

The specific intersection in Auckland where this system made its New Zealand debut is at Queen Street, a major commercial thoroughfare. The above photo depicts the Barnes Dance on that street in 1970.

The pedestrian scramble was first used in several cities in the United States and Canada starting in the late 1940s. The system owes its nickname “Barnes Dance” to Henry A. Barnes, an engineer who served as traffic commissioner in Denver, Baltimore, and New York City. While Barnes did not invent the pedestrian scramble, he became a strong champion of the system after observing the difficulties his daughter and her friends experienced trying cross a street to get to school.   His advocacy of the system led one newspaper reporter to write, “Barnes has made people so happy, they’re dancing in the street.”

Other countries where the Barnes Dance has been implemented over the years include Australia, Japan, the Netherlands, and the United Kingdom. The system has been lavishly praised by many and staunchly criticized by others. After being introduced in Auckland, it was soon likewise adopted by other cities throughout New Zealand. Several of those communities ultimately phased out pedestrian scrambles, but the system remains in place on Queen Street and various other prominent locations in New Zealand.

Additional information on the introduction of the pedestrian scramble (also known as the Barnes Dance) in New Zealand is available at https://www.flickr.com/photos/archivesnz/20694824745 and https://www.stuff.co.nz/dominion-post/news/106445651/flashback-the-rise-fall-and-rise-again-of-barnes-dance-crossings