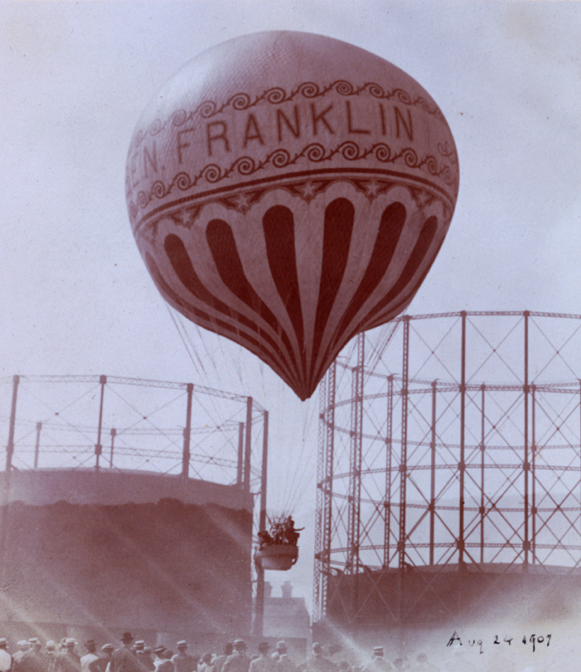 A hot-air balloon called the Ben Franklin made a widely publicized maiden flight of more than six hours that began in Philadelphia. This balloon was the largest to be built in the United States up to that time, and its basket could carry a maximum of 3,200 pounds (1,452 kilograms). The Ben Franklin was constructed in Philadelphia and named in memory of the Founding Father who had been one of that city’s most prominent and versatile residents.

The development and launch of that record-setting balloon took place under the sponsorship of the Ben Franklin Aeronautical Society of the United States. This society, according to the New York Times, “was organized purely for pleasure trips and for scientific investigation.”

Starting at 6:00 on the morning of the flight, the balloon was filled with coal gas. This process was not completed until 12:30 p.m. The launch of the Ben Franklin occurred more than two hours later, with a total of seven men on board for this maiden flight.

The renowned ballooning pioneer Samuel Archer King served as the pilot for the flight. The first of the passengers to climb into the balloon’s basket was T. Chalmers Fulton, president of the Ben Franklin Aeronautical Society. He brought with him various scientific devices to help with making observations while up in the air and a kit of surgical instruments for possible use in medical emergencies. The others who made their way into the basket for the flight included George H. Simmerman, second vice president of the Ben Franklin Aeronautical Society; J. Edwin Rech, the society’s secretary; George Weisbrod, Jr.; and A.E. Atherholt.

Thousands of people were on hand to watch the Ben Franklin begin its ascent into the skies at 2:50 p.m. “Slowly upward it went, straight toward a big cloud,” reported the New York Times. “For an instant there was the strange sight of a wicker basket containing seven men apparently supported on the wisp of a cloud. Then the basket disappeared too.”

A strong current of air initially carried the Ben Franklin from the Philadelphia area to the township of Egg Harbor on southern New Jersey’s Atlantic coast. Powerful winds then pushed the balloon northward to the central part of the Garden State. The airborne trip came to an end there when the Ben Franklin safely landed in a large field near the community of New Egypt. The total distance covered by the flight was estimated to be 160 miles (258 kilometers).

The New York Times noted, “ After the party landed near New Egypt, they sent telegrams to their friends, announcing the termination of their flight,  and packing up the balloon, obtained quarters for the night at the house of the farmer in whose field they descended.”

Augustus A. Post, president of the Aero Club of New York, was among the thousands who had witnessed the takeoff of the Ben Franklin in Philadelphia. He remarked at that time, “The day of the monster balloon is here, I believe.”

For more information on the debut of the Ben Franklin, please check out the 25 August 1907 New York Times article “Biggest Balloon in Maiden Flight” at  https://timesmachine.nytimes.com/timesmachine/1907/08/25/106761311.pdf​