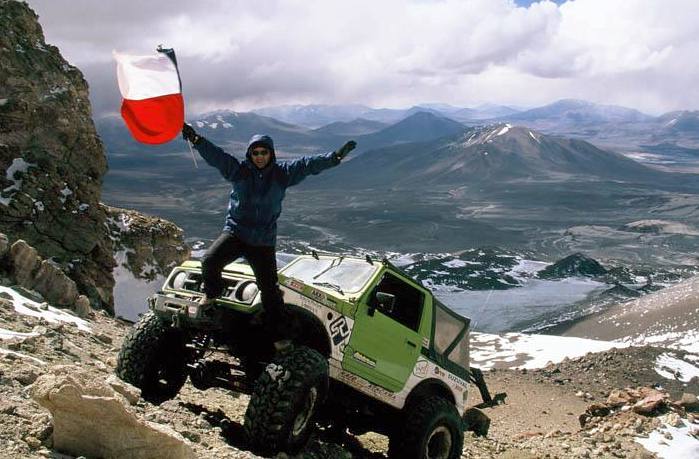 The Chilean duo of Gonzalo Bravo and Eduardo Canales Moya maneuvered a specially equipped 1986 Suzuki Samurai off-road car up the slopes of Ojos del Salado volcano. The volcano, measuring 22,615 feet in height, is located in the Andes on the Argentina-Chile border. It is the highest active volcano in the world and also has the distinction of being the second highest mountain in both the Western Hemisphere and Southern Hemisphere.

There have been several efforts to undertake at least a partial ascent of Ojos del Salado using motorized land vehicles. This is a lot easier said than done since anyone trying to scale the volcano has to be ready to deal with rocky and rough terrain; hurricane-strength winds; freezing temperatures; and a significant decrease in the amount of available oxygen.

While taking on these challenges and others, Bravo and Moya managed to reach an altitude of 21,942 feet on Ojos del Salado in their Suzuki Samurai. In doing so, they beat the previous records established by others who likewise drove four-wheeled vehicles up the slopes of the volcano. The duo also set a still-unbroken world record for the highest altitude attained by anyone driving a car.