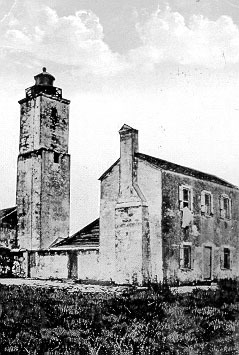 Sometime around 1824, Juan Andreu of the U.S. Revenue Cutter Service (forerunner to the U.S. Coast Guard) was appointed keeper of the St. Augustine Lighthouse on northeast Florida’s Atlantic coast. (The future state had become a U.S. territory in 1821.) Andreu, whose parents had been born in on the island of Minorca (off the eastern coast of Spain), served as keeper of that lighthouse for many years. He was the first Hispanic-American to be in charge of not only a lighthouse but any type of federal installation.

Andreu’s first tenure as keeper lasted until 1845. He resumed his duties there nine years later. While white-washing the lighthouse tower in 1859, Andreu fell 60 feet to his death when the scaffolding gave way. His widow Maria Mestre de los Dolores Andreu was subsequently appointed to succeed him as keeper of the St. Augustine Lighthouse. She operated the lighthouse for three years, becoming the first Hispanic-American woman to serve in this capacity.

For more information about the Andreus and their legacy as lighthouse keepers, please check out  http://americacomesalive.com/2015/09/21/first-hispanic-americans-in-coast-guard-were-lighthouse-keepers/.